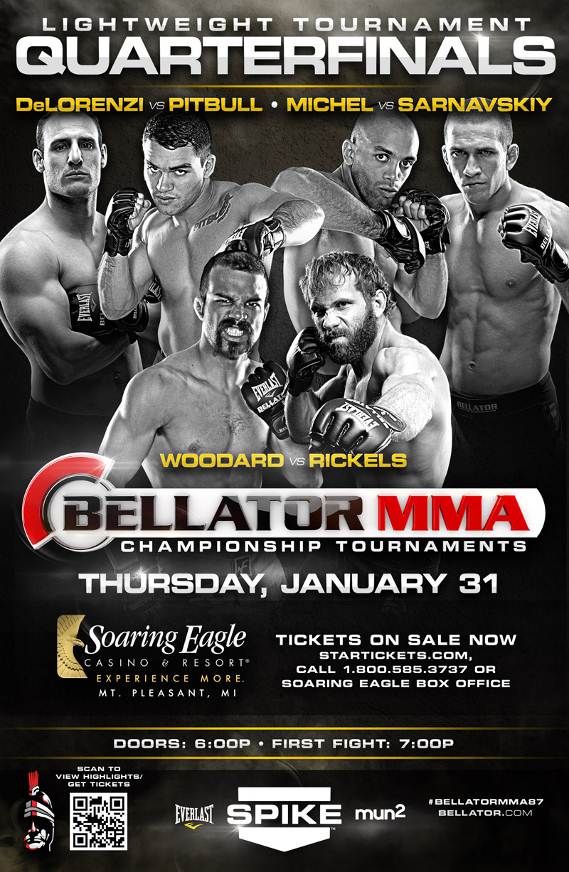 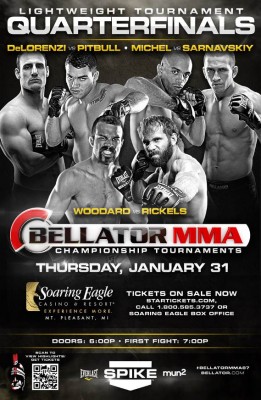 The Bellator MMA promotion will return to the Soaring Eagle Casino & Resort in Mount Pleasant, Michigan on January 31st for the premiere event of the $100,000 Lightweight Tournament Championship.

The event will feature Patricky Pitbull, Lloyd “Cupcake” Woodard and David “The Caveman” Rickels. Tickets for the event are on sale now and are available at StarTickets.com, Bellator.com, and The Soaring Eagle Casino & Resort Box Office.

The event will broadcast LIVE starting at 10 p.m. EST on Spike, as well as in Spanish language on mun2. The preliminary card will be streamed LIVE and FREE on Spike.com starting at 8 p.m. EST.

David Rickels will take on Lloyd Woodard in the opening round of the tournament, and both fighters sound like they are ready to put on a show:

“This is just nasty matchup that’s going to be a war,” Rickels said. “Cupcake is a guy that likes to throw down, and come right at you, and like you saw in my fight against Amoussou, I don’t get intimidated by anyone, and certainly not by a guy named cupcake.”

“All I can say is the mountain man from Montana is going to come to Michigan and show this “Caveman” a mountain main ass whooping,” Woodard said. “Fighting on Spike is going to be an incredible experience, and I just can’t wait to get back into that Bellator cage, and make a run through this tournament.”

Kickboxer Thiago Michel will take on Tiger” Sarnavskiy as both fighters are coming off victories in their last bouts. Also, Patricky Pitbull is back and will battle Guillaume DeLorenzi in tournament action.

“Our first event at Soaring Eagle Casino & Resort was a tremendous success, so we made it a point to get back to Michigan as quickly as we could,” said Bellator Chairman & CEO Bjorn Rebney. “This Lightweight Tournament live on Spike is stacked with some of the sport’s most exciting finishers, so I expect another night of great fights and a packed arena.”