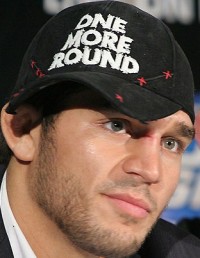 UFC officials have announced another welterweight bout for the UFC 158 card slated for March 16 in Montreal, Canada.

Patrick Cote will be dropping down to the welterweight division to take on Bobby Voelker. UFC 158 will be headlined by the UFC welterweight championship fight between Georges St. Pierre and challenger Nick Diaz and will take place at the Bell Centre.

Cote (18-8) is coming off a disqualification win over Alessio Sakara at UFC 154. The rematch was rescheduled for UFC 158, but Sakara had to withdraw from the bout with an injury.

Voelker (24-8) will be making his UFC debut after winning three consecutive fights in the Strikeforce Challengers promotion. However, Voelker hasn’t competed in MMA for well over a year and will look to avoid cage rust when he returns.