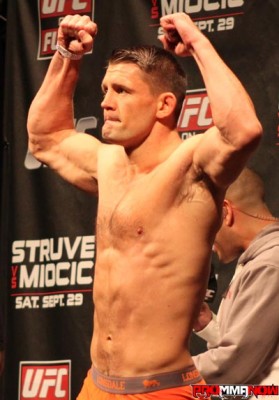 A new bout has been added to the UFC on FUEL TV 7 card as Tom Watson (15-5) faces Stanislav Nedkov (12-0) in a middleweight matchup. The event is set to take place at the Wembley Arena in London, England, on Feb. 16.

UFC on FUEL TV 7 will feature a headline bout between current UFC interim bantamweight champion Renan Barao and challenger Michael McDonald. The main card will air on FUEL TV following the prelims, which are expected to air on Facebook.

Tom Watson last fought at UFC on FUEL TV 5 in September, where he dropped a decision loss to Brad Tavares in his UFC debut. Prior to that he had been on a three fight winning streak, successfully defending the BAMMA middleweight championship against Alex Reid, Murilo Rua and Jack Marshman. Watson will no doubt look to get himself back onto the winning track with a good performance against Nedkov.

Meanwhile, Stanislav Nedkov was last in action at UFC on FUEL TV 6 in November, where he suffered a third round submission loss against Thiago Silva. However, it was later revealed that Silva had failed his post fight drug test, testing positive for marijuana metabolites and the result was overturned and changed to a No Contest. Prior to that Nedkov had been on a 12 fight winning streak and is yet to be beaten as a pro. A big win over Watson will definitely send a message to the rest of the division.

Stay close to ProMMANow (www.prommanow.com) for all the latest UFC news.