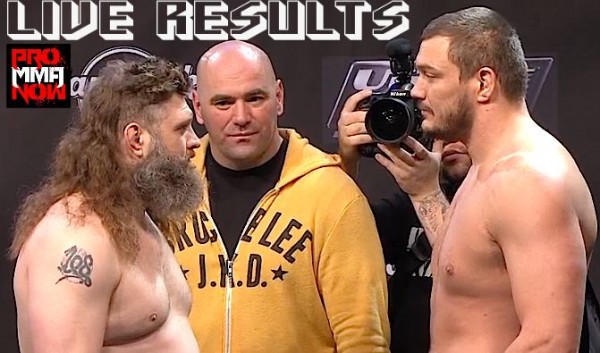 Roy Nelson continued his streak of winning by knockout, taking out Matt Mitrione in devastating fashion at the 2:58 mark of the opening round. All five of Nelson’s victories in the UFC have come by way of TKO or knockout.

Mitrione started strongly by establishing his kicks early, bruising the arm of Nelson who found himself defending head kicks from the TUF alumni. Mitrione also found success with his jab, using his reach to keep the power of Nelson at bay. Nelson fired back, but found himself swinging at air early with his patented overhand right.

Nelson finally found success once he started throwing his power combinations. “Big Country” ducked in and landed a staggering uppercut that immediately backed up Mitrione. He then followed up with a clipping left hand and a subsequent right hand over the top that sent Mitrione reeling toward the canvas. “Big Country” pounced, landing a barrrage of right hands that forced the referee to intervene and stop the action.

The victory improves Nelson’s overall record to 18-7 (5-3 UFC), while proving that “Big Country” is a true threat in the UFC’s Heavyweight division.