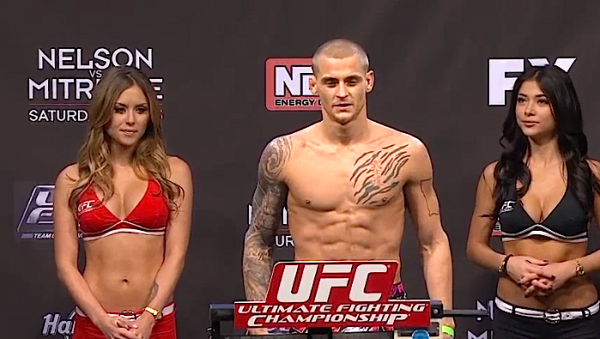 Dustin Poirier found himself in an unexpected slugfest with Jonathan Brookins to kick off the main card of the TUF 16 finale. Both fighters stood in the pocket and banged early, but it was the submission game of “The Diamond” that would end the fight late in the first round as he submitted Brookins with his signature D’arce choke.

Brookins came out fast, showing off a marked improvement in his stand up game as he used his reach to establish a stiff jab early. Brookins then used the aggressiveness of “The Diamond” to uncork a counter-right hook that staggered Poirier. Brookins looked for the finish with his opponent on the cage, but Poirier fired back, resulting in a furious exchange as both guys threw caution to the wind with power shots.

After a reset, it was Poirier that finally found his range, stunning Brookins with an uppercut that connected during a multiple punch combination. Brookins looked to survive as Poirier continued to land with a flurry. As Brookins dropped for a takedown attempt to stop the onslaught, Poirier found his neck and locked up a tight D’arce choke. “The Diamond” adjusted his grip, took it to the floor and got the tap at 4:15 of the opening round.

The win moves Dustin Poirier to 13-2 overall (5-1 UFC), getting him back on track after his only loss in the octagon to “The Korean Zombie” at UFC on Fuel TV 3.