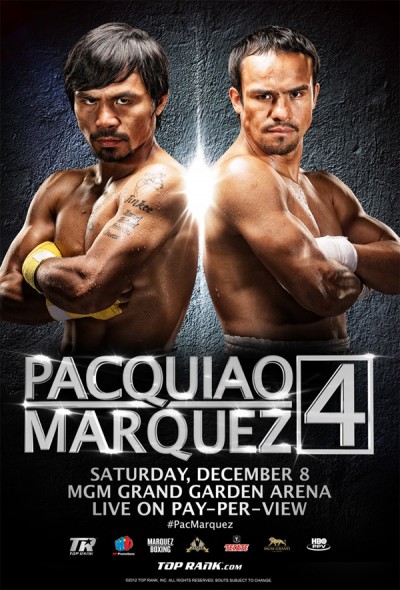 Juan Manuel Marquez and Manny Pacquiao faced off for a fourth time Saturday night at the MGM Grand in Las Vegas. After Marquez knocked down Pacquiao in the third, Pacquiao came back in the fifth with his own knockdown. But it was the next round, with only one second remaining when a bloody Marquez KO’d Pacquiao with an overhand right that left the pride of the Philippines face down and unconscious.

Here’s how we saw it play out round by round:

Round 1 – Lots of back and forth in round one, both landing some decent shots but nothing too significant. Pacquiao probably took the round by landing 13 shots to Marquez’s 5 shots.

Round 5 – Left jab from Pacquiao. Pacquiao scores a knockdown with a left. Marquez touches the ground, to force the count. Marquez stuns Pacquiao with a big right. Left from Pacquiao. Body shot, huge left right from Pacquiao, he’s hurt. Manny pours it on against the ropes. Marquez wobbling but still throwing back. This is a war folks. Best round of boxing I’ve seen in years maybe. Pacquiao 10-8.

Pacquiao was very respectful after the fight and said he is open to a fifth bout with Marquez. The two fought to a draw in their first fight back in 2004. Pacquiao won the next two bouts in 2008 and 2011, both by decision. What do you think boxing fans, you want to see one more?