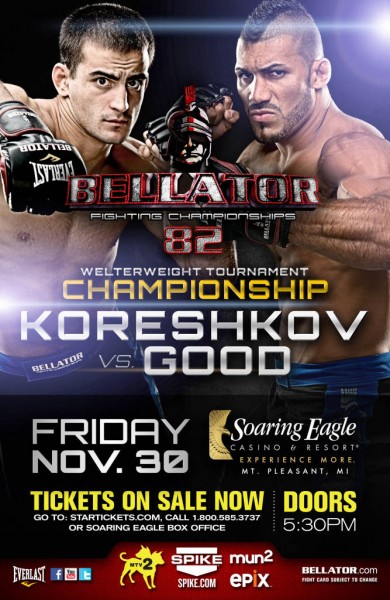 Bellator 82 takes place this evening at The Soaring Eagle Casino and Resort in Mount Pleasant, Mich. A $100,000 payday and a welterweight title shot are on the line as Lyman Good squares off against Andrey Koreshkov in the Season 7 Welterweight Tournament Finals.

Bellator 82 will air LIVE on MTV2 starting at 8 p.m. ET/7 p.m. CT on MTV2 and in commercial-free HD on EPIX, as well as in Spanish language on mun2. The prelims will air LIVE and FREE on Spike.com.

Round 1 – Sarnovskiy ties him up against the cage. Hervey is a dancer in his other life. The Russian puts him on his back. Full guard from Hervey. Big forearm from Sarnavskiy. Scramble and the Russian ends up in full mount looking for an armbar as he sits on Hervey’s chest, he goes for it, it’s deep. Hervey defends and lands some nice rights. Back to the feet, Hervey with a knee to the gut. Hervey’s arm looked hyper extended in that armbar attempt. Sarnavskiy puts him back down. Hervey with full guard. Ground and pound from Sarnavskiy, he stacks him, big left hand, sits down in full mount. Clearly Hervey needs work on his ground game and wrestling. Hervey goes for a leg but Sarnavskiy ends back up on top inside full guard. Big left and an elbow from the Russian. Up kick from Hervey partially lands. Dive in right hand from Sarnavskiy. Under a minute to go. Another up kick from Hervey. The Russian continues to assault with ground and pound although nothing seems to be doing too much damage. Lands another couple punches before the bell. PMN scores the round 10-9 Sarnavskiy.

Round 2 – Hervey is already on his back and mounted by Sarnavskiy in under a minute. Hervey uses the cage to try and escape by pushing off with his feet. The Russian laying on the ground and pound, picking his shots and landing some solid punches. Big left and a right hook to the side of the head. Hervey trying to block from the bottom but taking a ton of punishment now. Hervey sweeps and gets to his feet. Sarnavskiy gets underhooks against the cage. He seems to strong for Hervey. Hervey seems very athletic as a dancer but he’s getting controlled so far. Hervey lunges in with a big hook, Sarnavskiy simply shoots under for a double and Hervey is right back to the ground. A few elbows from Hervey off his back but Sarnavskiy controlling the position and staying just busy enough to not get stood up. PMN scores the round 10-9 Sarnavskiy.

Round 3 – Hervey trying to unload with some Capoiera style kicks but you know what happens. Sarnavskiy back inside Hervey’s guard landing body shots and hammerfists and punches. Hervey gets to his feet. Sarnavskiy has a body lock from behind, drives him to the cage. Hervey runs up the cage wall and tries to flip over as Sarnavskiy is still holding him. It almost works but Sarnavskiy ends back up on top on the ground. Hervey scrambles, Sarnavskiy takes his back with a body triangle locked in and he punishes Hervey with punches and now gets full mount. Hervey recovers full guard and tries his best to get to his feet, gets to his knees and Sarnavskiy takes his back once again. Under a minute to go. Hervey gets to his knees but Sarnavskiy just rides him; full mount punishment now from Sarnavskiy, he stacks Hervey before the bell. PMN scores the round 10-9 and the fight 30-27 for Sarnavskiy.

Round 1 – Don’t blink. No really, don’t blink while reading the play-by-play.Okay now you can blink. Here we go. Marshall comes out with big hooks. Hose is firing back, lunges in and lands a big knee to the body. Marshall looks a bit rocked as he retreats, Hose comes rushing toward Marshall with his hands down and gets tagged with a big left hook (looks like the wrist/forearm of Marshall hits Hose right on the chin), Hose goes down, bangs the back of his head on the canvas. He rises up not knowing where he is as Marshall dives in for a follow up punch but the ref dives in-between the two stopping the fight. Fast, furious and brutal — and The Rhino delivers in a big big way! Credit to Hose for laying it all on the line, he was going for the kill too, himself.

Marshall is pumped in his post-fight interview and tells the fans to write to Bellator to let them know if they want to see more of that!

Round 1 – The guys exchange punches and kicks for the first minute, nothing landed solid until Fischer lands a nice left jab at about the 4-minute mark. He looks for the takedown, Rickels defends and Fischer backs out. They square up. Big leg kick from Rickels buckles the leg. Clinch. Fischer shoots, stuffed. Nice body shot from Fischer. Left jab from Fischer. Rickels lands a knee to the face. Body kick, left hand from Fischer, he gets a body lock, trip takedown. Full guard from Rickels and Fischer stacks him with a nice punch. Fischer working the ground and pound. Rickels throws up his legs, but Fischer pulls out and stands up. Right from Rickels. Uppercut from Fischer scores. Body kick Rickels. Knee to the body. Right from Fischer, goes for the takedown but ends up on his back with Rickels inside full guard. Fischer throws up and armbar attempt. 20-seconds to go. Rickels gets free of the armbar lands an elbow or two and some body shots. Close round really. I give the edge to Fischer 10-9.

Round 2 – Left hook from Fischer. Front kick from Rickels. Spinning backfist followed by a round kick from Fischer, both connecting. Clinched, Rickels turns him to the cage scores with an elbow. Hook from Rickels, head kick Fischer. Thai plum from Fischer, Rickels gets free of it and Fischer shoots, stuffed. Rickels turns him to the cage, knee exchange to the thighs. Fischer makes a mistake and exposes his back. Rickels hops on it and crushes him to the ground, now in full mount. Fischer  eats some big punches, but goes for a leg lock. Rickels escapes but is now on his back taking punishment from Fischer inside his full guard. Rubber guard from Rickels, lets it go. Rickels has lost his mouthpiece for the second time. Mission control from Rickels, lets it go. Big hemotoma over Rickels left eye. Rickels gets to his feet and puts Fischer on his back. Fischer has a pretty big gash over his left eye. Rickels pours on the head with hammerfists and punches. Fischer gets to his knees, looking for a leg but eats more shots until the bell sounds. PMN scores the round 10-9 Rickels.

Round 3 – Big leg kick from Rickels. Fischer fires back with punches and kicks. Knee from Rickels. Right hand. Head kick Fischer, body kick. Rickels grabs a single, lets it go. They tie up. Fischer looks for a standing kimura, tries to roll for it and ends up face down with Rickels fighting to get hooks in. Fischer explodes, sweeps and is now on top inside full guard. Rickels throws up his legs for an armbar.  Fischer stands on Rickels’ face with one foot and forces his arm out (see photo). I’ve never seen that. Did not even know it was legal. You can stand on a fighter’s face?  That’s crazy. No one said a word about it being illegal. Fischer now on top eating elbows from Rickels off his back. Rickels has rubber guard controlling Fischer and beating him up from off his back. Bunches of elbows from Rickels off his back. Fischer gets out of the rubber guard. Rickels still has full guard for a moment. Fischer postures up with shots but gets caught back inside guard. Rickels tries to sweep. PMN scores the round 10-9 for Fischer and the fight 29-28 for Fischer.

The crowd boos the decision.

Round 2 – Touch gloves. Leg kick Good. Left jab Good. Leg kick inside. Nice left jab, uppercut from Koreshkov. Left hook, double uppercut from Koreshkov. Good shoots, gets Koreshkov down, takes his back with both hooks in. Koreshkov gets to his knees, Good flattens him out, looking for the choke. Koreshkov sits up on his butt. Now to his knees. Good rolls him over, both hooks in now again. Good searching for the neck, lands an elbow. Koreshkov gets free to his feet. Good blocks a high kick. Leg kick Koreshkov. Left hook from Koreshkov. Under a minute to go. Good seems to know he’s ahead in this round. Leg kick from Good, Koreshkov catches it and dumps Good to this back. Lets him up. They exchange punches, nothing much landing. Koreshkov shoots at the bell and drives in for the takedown even though the ref is trying to stop it. Good gives him a little punch to the face well after the bell. PMN scores the round 10-9 Good.