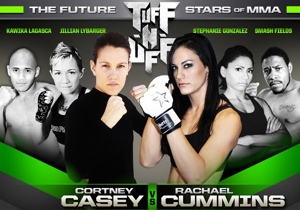 Was your holiday in Vegas filled with takedowns, KO’s, and submissions? If so you probably attended the 2012 “Feastibrawl” held at South Point Hotel and Casino.

The all-amateur MMA event presented by local promotion Tuff-N-Uff was a great pre-Thanksgiving gathering for MMA fans and the community. In addition to the fight card “Feastibrawl” also featured live music and can food drive.

The Sepe brothers made it a family outing as Brandon Sepe KO’d Deangelo Yates (135 lbs.) in the first round, while his brother Bryce Sepe dropped a decision to Brian Caleros (135 lbs.), who nearly submitted him with a triangle late in the third.

The match in-between the sibling appearances featured Myles Watson vs. Brian Bashant (155 lbs.) that ended just 59-seconds into the first round due to Watson’s broken nose.

The fight-of-the-night belonged to Leon “Zulu” Ford vs. Jason Robles (155 lbs.). Both competitors came out strong, but Ford won the first round with a hard takedown followed by skilled ground and pound.

The Riverside fighter mirrored that combination in the second adding a fury of strikes which convinced the judges to score it a unanimous decision for Ford.

The first win by submission came courtesy of Jesse “Habanero” Romero who defeated Edy Sanchez (135 lbs) with an armbar 1:17 into the second round.

Donavon Frelow also won by submission with a guillotine choke against Corey Jeffers (135 lbs) 1:27 into the second round. After the victory Frelow explained his 5-1 record is a result of good training partners at Fight Capital in Las Vegas.

“I got a little crazy and wild, but came out with the victory,” Frelow said regarding his performance.

In the second women’s match hometown favorite Jillian “Justice” Lybarger surprised the crowd with a knockout of Stephanie “The Shark” Gonzalez 1:23 in the first round. The KO was unexpected as neither lady until that point seemed to have an early advantage.

Cortney “Cast Iron” Casey of Mesa, Ariz. and Rachael “The Panther” Cummins of Lake Forest, Calif. also represented for the women by giving fans a great fight. But even the valiant effort of Cummins couldn’t escape the champ’s flying armbar submission 42 seconds into the third round (see video below).

Finally fans witnessed two locals Mikey “Pretty Boy” Perez vs. Dylan Jarhling (185 lbs.), which ended with a TKO win by Harling at 2:08 into the first found.

Many thanks to Tuff-N-Uff President Beyer Meyer and Fightline Media for putting giving fight fans a fight feast with all the fixings. For more information on upcoming events visit http://www.tuffnuff.com/.

Check out this video of the fight between Cortney Casey vs. Rachael Cummins that ended with a spectacular flying armbar submission from Casey: