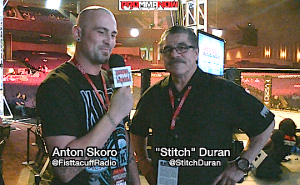 ProMMAnow.com (www.prommanow.com) reporter Anton Skoro recently caught up with MMA and boxing cut-man to the stars Jacob “Stitch” Duran at the inaugural World Series of Fighting event in Las Vegas.

“Stitch” talked about his role in the new Kevin James movie, “Here Comes the Boom”, in which he played himself.

He also discussed a new line of tape he has coming out called “Stitch Premium”, which he assured us is “top of the line”, as well as “Qwick-Aid”, which is a new hemostatic pad that will stop bleeding quickly and can be obtained without prescription.

“Stitch” discussed his best-selling book, From the Fields to the Garden: The Life of Stitch Duran, and why there won’t be a sequel — but, there could be a movie with our very own Anton Skoro playing “Stitch” — keep on the lookout for that folks!

Finally, “Stitch” talked about his incredibly busy schedule coming up for the month of December which will literally have him crossing the globe and he showed us why the world’s premiere cut-man definitely knows what time it is.

Keep up with everything “Stitch” has going on by following him on Twitter at @StitchDuran and on his website www.StitchDuran.com. Also, follow World Series of Fighting at @MMAWorldSeries and Anton Skoro at @FisttacuffRadio.