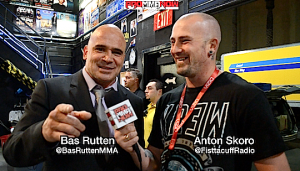 Rutten discussed the progression of his career inside and outside the ring and how far he has come from the days when he couldn’t even fill up the gas tank on his car all the way. He also talked about his acting career, his love of comedy and his role as “Niko” in the new movie “Here Comes the Boom” starring Kevin James and Salma Hayek.

You can watch Bas every Monday night on Inside MMA at 8 p.m. ET on AXStv, keep up with Bas on Twitter at @BasRuttenMMA, World Series of Fighting at @MMAWorldSeries and Anton Skoro at @FisttacuffRadio.