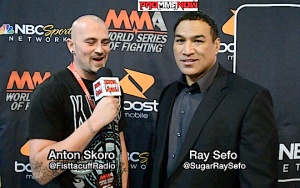 Following World Series of Fighting‘s inaugural event and NBC Sports Network live broadcast earlier this month in Las Vegas, ProMMAnow.com (www.prommanow.com) reporter Anton Skoro caught up with WSOF president Ray Sefo for a few minutes to chat about the event and the future of the promotion.

Sefo, a legend in the world of kickboxing, talked about how the nerves of putting on and promoting such a big event compare to those nerves he would get as a fighter.

Sefo also explained how they do not view themselves as a competitor to the UFC, but in fact have a great relationship with the UFC and pointed out that several employees of the UFC were even in attendance. The WSOF president also clarified their position on fighter contracts and explained why they are exclusive.

You can keep up with Ray Sefo on Twitter at @SugarRaySefo, World Series of Fighting at @MMAWorldSeries and Anton Skoro at @FisttacuffRadio.