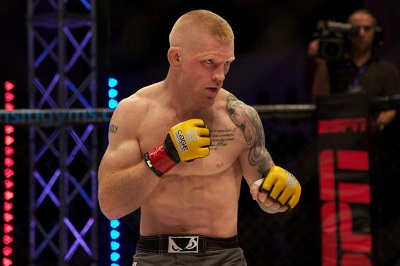 The card for Cage Warriors 51 in Dublin on New Year’s Eve is beginning to take shape with today’s addition of two exciting bouts to the end-of-year extravaganza in the Irish capital.

Cage Warriors 51 will take place at The Helix on Monday, December 31, and is set to be headlined by a featherweight title bout between Jim Alers and defending champion Conor McGregor. Also, a women’s 120lbs catch weight bout between Aisling Daly and CWFC debutant Katja Kankaanpaa will be on tap.

Kankaanpaa (6-0-1) is undefeated after making her debut in March 2010. Kankaanpaa’s last outing was against Simona Soukupova in the main event at Botnia Punishment 12 which ended in a draw, and she will be making her first Cage Warriors appearance in Ireland next month.

On the preliminary card, Liam James will collide with Irish bantamweight Alan Philpott.

Philpott (7-3) is coming off a huge submission win over Kris Edwards at Cage Warriors 49 last month after taking the fight on less than a week’s notice. James (6-4) defeated Jean N’Doye at CWFC Fight Night 5 back in April, winning the “Fight of the Night” bonus and a exclusive Cage Warriors contract. However, James then dropped to 135lbs for his clash with French veteran Olivier Pastor at September’s CWFC Fight Night 7 and suffered a second-round submission defeat.

Tickets for Cage Warriors 51 will go on sale later this month, with more bouts to be announced shortly.