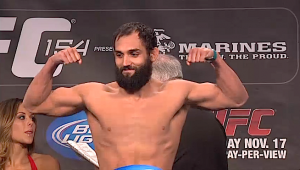 However, the next legitimate contender solidified himself in the co-main event when Johny Hendricks starched Martin Kampmann via KO in less than a minute in the first round of their bout.

The GSP/Hendricks fight may not come to fruition at the moment.

UFC President Dana White and company were flirting with the idea of Georges St. Pierre fighting UFC middleweight Anderson Silva in his next fight in a “pound for pound” fight before St. Pierre event fought Condit. A GSP/Silva fight is a fight that would be big business for the promotion and the two fighters would make a ton of money as well. However, that fight should not happen until at least Johny Hendricks gets his shot at Georges St. Pierre.

The proposed fight would take place sometime in May according to Dana White. However, the UFC welterweight division has been on hold for the past year with GSP rehabbing his knee injury while Condit awaited his return to unify the belt. Why put the division on hold for another year basically for a fictional title?

In fact, Anderson Silva has a fighter in Chris Weidman who deserves a shot at his title. White has always used the ‘fighters should clean out their divisions before jumping to different weight classes’ mantra. Of course, it’s all about name recognition with Hendricks and Weidman as both are very good fighters with little appeal PPV wise at the moment.

Johny Hendricks (14-1) has won five fights in a row, including three consecutive fights over fighters ranked at or near top five in the world. He destroyed perennial top three welterweight Jon Fitch in 12 seconds. He bested former title contender Josh Koscheck in his next outing via split decision. He then took out Martin Kampmann via KO in 46 seconds at UFC 154 on Saturday night, and those three fights have all happened in less than a years time.

Hendricks may not be a household name, but he doesn’t need to be when fighting arguably the best PPV draw in MMA with St. Pierre. The timing would be perfect since both fighters just fought on the same card, and Hendricks has clearly earned the shot at the title.