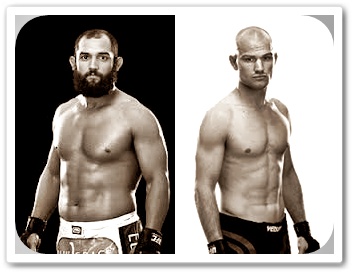 The UFC 154 co-main event will consist of a welterweight fight between top contenders Martin Kampmann and Johny Hendricks. The winner of this bout will likely earn a title shot in their next fight against the winner of the GSP/Condit bout in the main event. Let’s see how this one breaks down.

Martin Kampmann (20-5) is coming off his KO win over Jake Ellenberger at the TUF Live Finale in June. Kampmann was stunned early in the fight, but was able to survive and take advantage of a tiring Ellenberger in the second round to get this finish. Kampmann has won eight fights via TKO/KO and seven fights via submission and has been finished three times via TKO. The Dutch fighter has good technical standup skills and is very savvy on the ground when it comes to submissions.

Johny Hendricks (13-1) is coming off the split decision win over Josh Koscheck at the UFC on FOX 3 event in May. Hendricks has won four consecutive fights since suffering his lone defeat against Rick Story at the TUF 12 Finale in 2010. Hendricks has won seven fights via TKO/KO and one fight via submission. Hendricks has won “Knockout of the Night” bonuses twice since making the transition to the UFC. The two-time Division I national wrestling champion has dynamite in his hands, but his impressive wrestling pedigree hasn’t exactly transferred over into MMA.

What will be the difference maker?

The difference maker will be the power of Hendricks. Kampmann will have a reach advantage and is way more technical when it comes to striking. However, Kampmann’s chin has been found many times throughout his career, and he gets dropped with a punch in almost all of his fights. Hendricks is an excellent finisher once he gets his opponents in trouble.

Hendricks will need to aware of the guillotine choke if he decides to shoot for a takedown against Kampmann, but other than that I don’t think Kampmann will threaten Hendricks much with submissions if the fight goes to the ground. I think Kampmann will have to fight a near perfect fight to win in regards to landing effective strikes while being able to defend the takedown as well. If you couple that with the way he takes punishment in each of his fights, I think the power of Hendricks will be the deciding factor.

Hendricks gets it done here either via TKO or decision.