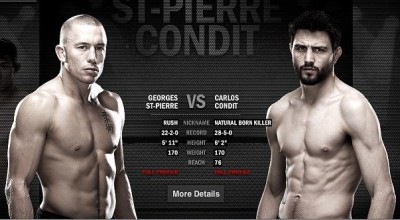 The UFC 154 main event will feature a main event between UFC welterweight champion Georges St. Pierre as he takes on UFC interim welterweight champion Carlos Condit. This will mark GSP’s first fight in the octagon in well over a year with Condit returning for the first time since February. It should be a war, so let’s see who’ll come out the victor.

Carlos Condit (28-5) is coming off his controversial unanimous decision win over Nick Diaz at UFC 143 to become the UFC interim welterweight champion. Condit has won 13 fights via TKO/KO and 13 fights via submission, and has only allowed two fights four fights to goto the judges in his entire career. Condit is a good striker with muay thai and kickboxing while being well versed in submissions on the ground. The largest hole in his game is suspect takedown defense against guys with good wrestling bases.

Georges St. Pierre (22-2) last fought at UFC 129, winning a unanimous decision over Jake Shields for his sixth consecutive title defense. However, he suffered an ACL injury last December and has been out of action since then with rehabilitation. GSP has won eight fights via TKO/KO and five fights via submission. He’s arguably the most well rounded fighter in the sport, and the best wrestler in the sport without question. THE question is will he be able to perform at pre-injury levels or will he be a shell of his former self post-injury?

A lot of people are pointing to the long layoff as being the largest problem for GSP. I disagree because Condit has been out of action for quite some time himself. The biggest thing in this fight will be GSP’s ability to get into a groove offensively and trust that he’s back to his pre-injury self.

The fact that he’s such a dominant wrestler and that takedown defense is the biggest problem for Condit certainly bodes well for GSP. I think that a GSP that’s at 80-90% will have no problem getting the fight to the ground if he wants to. Also, the threat of a takedown will certainly limit a large portion of Condit’s offense since he likes to use kicks quite a bit.

GSP is successful on 78% of his takedowns and Condit defends takedowns at a 46% clip. Condit is very savvy on the ground, but GSP usually passes to half-guard of his opponents almost instantly, so the threat of Condit doing anything offensively there is relatively small. I don’t see him being able to sweep GSP from that position. Once the fight hits the ground I could easily see GSP control Condit while inflicting just enough damage to keep the fight there.

I think both fighters are capable of bringing with their standup skills with GSP being the more accurate striker according to Fightmetric. GSP has an excellent jab and usually keys everything off of that technique.  Again, GSP will have more tools at his disposal because he’ll be able to limit some of Condit’s game with the threat of a takedown. Condit will need to establish himself early and often to create doubt in the mind of GSP if he wants to be successful. He’ll need to be the aggressor and not allow GSP to find his timing and rhythm. If not, the more GSP gains confidence, the more difficult it’ll be for Condit to implement his game.

The one x-factor in this fight will be the cardio of both fighters. GSP has historically had elite cardio with Condit have very good cardio. If GSP returns to pre-injury form he would have the edge here. However, we don’t know what his cardio will be like going into this fight. Did the knee allow him to train and maximum capacity, or did it limit what he could do cardio wise? If GSP comes into this fight not in optimal cardio condition, I could certainly see Condit surviving the first couple of rounds and begin to turn it on the longer the fight goes on. Condit has sneaky power in his strikes, and GSP does tend to bruise/swell up relatively easy, so that’ll be something else to keep an eye on.

There’s a lot of if’s and but’s going into this fight with GSP. However, I can’t pick against him simply because of his biggest strength going up against Condit’s biggest weakness.

I think GSP takes this fight via unanimous decision since Condit is almost impossible to finish.