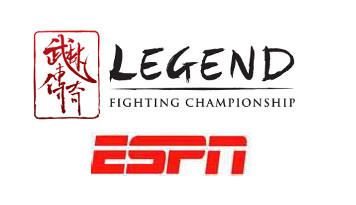 Legend Fighting Championship (LFC) has announced a new broadcast agreement with ESPN, which will expose the Asia-Pacific Championship of MMA to over 109 different countries. The new agreement means that ESPN will now feature all future Legend tournaments through the end of 2014, beginning with Legend 11, as well as archive content of Legend 2 through Legend 10.

ESPN will now deliver LFC content via television and broadband channels in Australia and New Zealand, the Caribbean, Latin America, the Middle East and North Africa, sub-Saharan Africa and cruise ships in these territories. This is a major step forward for LFC as an organisation and will introduce a whole new pool of mixed martial arts fans and viewers to Hong Kong’s premier MMA promotion.

Here is what Legend co-founder and managing director, Chris Pollak, had to say:

“Since our first tournament in January 2010, Legend has been bringing the best of Asia-Pacific MMA to a growing audience. This agreement will give our television and broadband streaming efforts huge new reach into multiple regions around the world, cementing our position as the most widely distributed Asian MMA content worldwide. We look forward to working closely with our partners at ESPN,”

LFC’s next event will be Legend 11, which will feature a headline bout between current Legend lightweight champion Jadamba Narantungalag and challenger Koji Ando. This will be the first show to fall under the new agreement with ESPN International. More details about television schedules and future events will be released in the months ahead.

Here is what vice president of programming at ESPN International, Michael Walters, had to say:

“We’re excited to bring Legend’s combination of a roster filled with elite Asia-Pacific fighters and high-quality production values to ESPN television and broadband channels in more than a hundred countries around the world,”

Stay close to Pro MMA Now (www.prommanow.com) for all the latest LFC news.