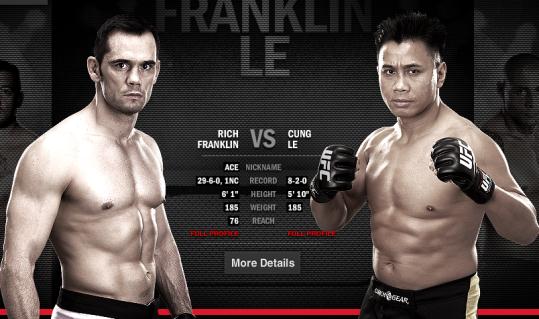 Cung Le (8-2) is coming into this fight off the unanimous decision win over Patrick Cote at UFC 148. That was the first time that Le had ever gone the distance in an MMA fight. He has won seven fights via TKO/KO and both of his losses have come via TKO/KO. Le is very unorthodox and has an assortment of kicks and spinning attacks in his arsenal. However, he has shown tendencies to gas during his fights as well.

Rich Franklin (29-6, 1NC) is coming into this fight off his unanimous decision win over Wanderlei Silva at UFC 147. Franklin was rocked early in the fight but managed to hold on and pull off the judges decision. Franklin has been competing in the light heavyweight division for the past few fights and this fight will be his return to the middleweight division. He’s won 15 fights via TKO/KO and 10 fights via submission. He has been stopped four times via TKO/KO. Franklin is a durable, well rounded fighter that usually fights with a smart gameplan.

This should be an interesting fight between two former champions near the end of their careers. Franklin will have the size advantage and a huge reach advantage over Le in this fight. He’ll also have the better cardio and should be much stronger than Le in the later rounds.

Franklin will need to pressure Le in this fight for the easiest path to victory. Le doesn’t have huge knockout power and most of his finishes have come via damage done over a period of time. Franklin will negate the kicking and spinning attacks of Le by keeping him moving backwards and/or pinning him against the cage in the clinch. That’s where the size advantage would come into play and from there he may be able to take Le down, although Le is probably the better wrestler on paper. The pressure applied would also make Le work at a higher output which would become a factor cardio wise since Franklin is superior in that department. A tired Le probably gets finished by Franklin late in the fight.

Le needs to use good footwork to circle out and/or create angles if Franklin chooses to pressure him. He’ll be giving up a big reach advantage, but his assortment of kicks and just the sheer threat of them probably negates the advantage for the most part.

I think we’ll see Franklin coming forward quite a bit in this fight with Le looking to counter. I think the pace that Franklin sets will begin to wear on Le towards the end of the first round. Franklin opens up on Le in the second and finishes him near the end of the second round or early part of the third via TKO.