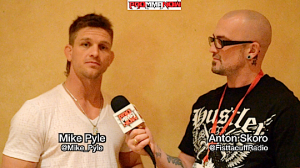 Pyle talked about his upcoming bout with James Head (9-2) at the TUF 16 Finale on December 15. Pyle said he will need to be on his “A-game” against Head, who is coming off back-to-back wins inside the Octagon.

Coming off two first round knockout victories, Pyle talked about a couple new coaches he is working with who have been a big asset to his training camp. He finished up by saying this time next year he hopes to either be in title contention or wearing the UFC 170 pound title.

You can keep up with Mike Pyle on Twitter at @Mike_Pyle, Resurrection Fighting Alliance at @RFAfighting and Anton Skoro at @FisttacuffRadio.