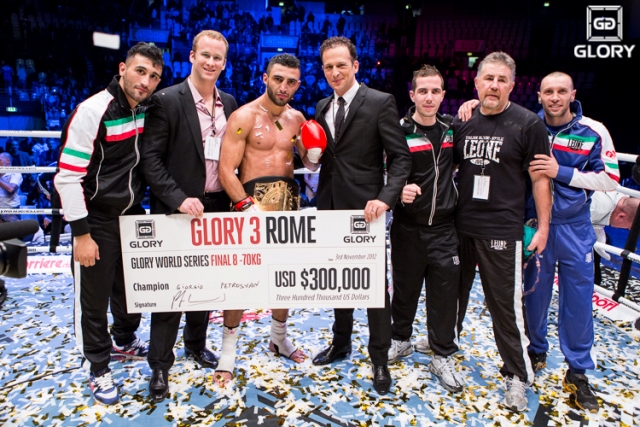 Petrosyan used his world class kickboxing to defeat Ky Hollenbeck of the USA, Davit Kiria of Georgia and Robin van Roosmalen of the Netherlands in the final fight of the evening.

Here is what Marcus Luer, Managing Director of GLORY, had to say:

“Italy has a history of producing master artists,” said Luer. “Petrosyan is to his art what Leonardo Da Vinci was to his. He really is that special and that unique. His performances are beautiful to witness, they really do transcend the sport.”

In the final bout of the evening Petrosyan stepped up to face the dangerous van Roosmalen in what was a real clash of styles. Giorgio was able to work some nice angles and used good positioning to avoid some potentially devastating power strikes. Not allowing his opponent to land big with his punches and avoiding any damaging exchanges, Petrosyan, managed to put in the more dominant performance earning himself the decision victory.

Here is what Giorgio Petrosyan had to say:

“I was confident that, if I went out there and did my best, that I would win the tournament and I did,” he said. “But they were all very strong fighters and they are champions too. I am very proud that this tournament was in Rome and that I could fight in front of an Italian crowd. Their support was very nice and I would like to thank everyone who came to the arena to support me.”

The full GLORY Rome ‘Final 8’ Results are below:

Stay close to Pro MMA Now (www.prommanow.com) for all the latest GLORY news.