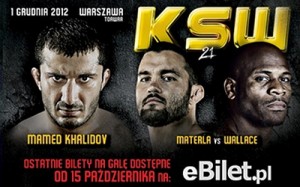 KSW 21 is scheduled for December 1 at the Hala Torwar in Warsaw. The event is headlined by one of the world’s top middleweights outside the UFC, Mamed Khalidov (25-4-2), who will face hard-hitting knockout artist Melvin Manhoef (26-9-1, 1 NC).

Khalidov has stopped his last five opponents all in the first round. Four of them were UFC veterans: Rodney Wallace, Jesse Taylor, James Irvin and Matt Lindland. With 11 wins by KO, 13 by submission, and only one decision, Mamed Khalidov is a fighter everyone should be paying attention to.

However, Manhoef is no joke and comes into the bout having won his last two bouts, including a first round KO win over Ryo Kawamura at ONE FC earlier this month. KSW 21 is co-headlined with a middleweight title fight between champion Michal Materla (17-3) and UFC vet Rodney “Sho-Nuff The Master” Wallace (14-5). Lightweight and Welterweight title fights are also on the card.

Check out this official KSW 21 trailer.