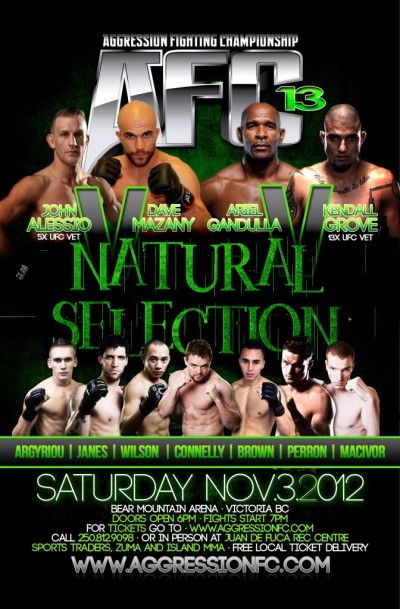 UFC vet John Alessio (34-16) will face Wand Fight Team’s Dave Mazany (10-4) in the Aggression Fighting Championship 13 main event on November 3 at Bear Mountain Arena in Victoria, B.C. The two will compete at a catchweight of 160 pounds.

Alessio now lives in Las Vegas but is originally from Victoria. He commented on returning to fight in his hometown after many years:

“I am super pumped to fight back where it all began, in Victoria, where I haven’t fought since 1998. I can’t wait to put on an exciting fight for the AFC.”

Alessio was on a three-fight win streak before returning to the UFC earlier this year where he dropped back-to-back bouts against Mark Bocek and Shane Roller, both via unanimous decision.

The veteran Alessio, now 33, will look to get back on track as he faces 29-year-old fellow Las Vegan Mazany, who has already fought and stopped three opponents so far this year.

The 29-year-old Grove has gone 4-1 since being released from the UFC last year. His 2012 wins include decisions over Ikuhisa Minowa and Derek Brunson, as well as a submission win over Joe Cronin in September.

Grove’s sole post-UFC loss was a triangle submission from Jay Silva in February.

Forty-four-year-old Ariel Gandulla comes into the fight having not fought since 2011 when he scored first round stoppages over the likes of Oscar Delgado and Marvin Babe.

Prior to that Gandulla had a three-year stretch where he lost six fights in a row against such names as Doug Marshall, Shane Primm and T.J. Cook.

For those looking to attend AFC 13 in person, ticket information is available at  www.aggressionfc.com. Doors open at 6 p.m., fights start at 7 p.m.