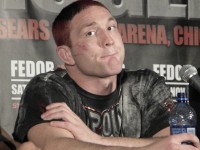 Jason “Mayhem” Miller’s behavior of late has truly lived up to the now-retired middleweight’s nickname. We previously reported the news of Miller’s downright bizarre arrest in August, when the DREAM, Strikeforce, and UFC veteran was found naked in a church that he allegedly vandalized with a fire extinguisher.

Miller then followed up his shenanigans with a now infamous ‘interview’ (I use the term very loosely here) on The MMA Hour with Ariel Helwani.

Over the course of his 15-year career ‘Mayhem’ has been no stranger to controversy and, well… mayhem. But, in a follow up interview released today by MMAFighting.com, Miller spent nearly an hour talking to Ariel Helwani in an uncharacteristically collected fashion.

During the extended interview Miller discusses his future in the sport, his relationship with Dana White and the UFC, his erratic behavior, and his image in the media. It’s definitely worth a look given all the malarky and negative buzz that has followed Jason since his release from the UFC, and sheds some light, if only a sliver, on the man behind the ‘Mayhem’.

3 thoughts on “Jason Miller returns… minus the Mayhem”