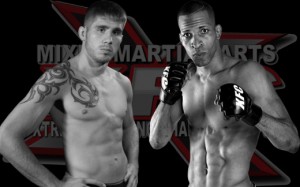 XFC officials announced today that a welterweight bout between Corey “The Real Deal” Hill (6-4) and Ryan “The Tank Engine” Thomas (14-7) has been finalized for the promotion’s upcoming XFC 21 card.

The two XFC veterans are slated to square off in the co-main event of a card that will also feature Eric Reynolds and undefeated amputee fighter Nick Newell battling for the XFC lightweight championship.

Fans may remember Hill from season five of The Ultimate fighter, in which he made it to the quarterfinals before losing to UFC lightweight contender Nate Diaz. Meanwhile the American Top Team product, Ryan Thomas, has only had two fights in his career go decision, recording all of his wins by  TKO or submission.

Hill enters the matchup with a significant reach and technical grappling advantage, but Thomas’ size and experience, having fought in the UFC and Bellator prior to signing with XFC, should more than offset Hill’s wrestling pedigree in what looks to be an exciting contest unlikely to go the distance.

XFC 21 is set to take place on December 7th, and will be broadcast live from Nashville, TN on AXStv. For all the latest XFC news, notes, and commentary stay tuned to ProMMANow.com