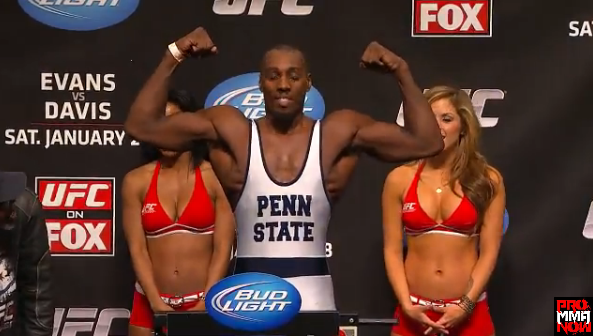 It looks like Antonio Rogerio Nogueira’s request to fight Forrest Griffin at UFC 155 went unanswered. UFC officials have announced that Phil Davis will step in to face former light heavyweight champion Forrest Griffin on December 29th at UFC 155. The bout will take place at the MGM Grand Garden Arena in Las Vegas, Nevada.

Phil Davis (10-1, 1NC) is coming off a second round submission victory over Wagner Prado at UFC 153. The former college wrestling national champion was able to use his wrestling and ground and pound to force Prado to make a mistake on the ground which opened up the submission opportunity. It was the second consecutive time the two fighters had fought as the first matchup ended in a no-contest because of an eye poke injury to Prado. The only loss Davis has suffered was against former light heavyweight champion Rashad Evans at the UFC on FOX 2 event in January.

Forrest Griffin (19-7) is coming off his split decision victory over Tito Ortiz at UFC 148 which earned “Fight of the Night” honors. Griffin had been out of action since suffering a first round TKO loss to Mauricio “Shogun” Rua at UFC 134. His wife gave birth to their first child shortly after the loss which was a factor in him being out of action for close to a year prior to the final Ortiz bout. Griffin was originally scheduled to face Chael Sonnen, but Sonnen will now coach on the next season of “The Ultimate Fighter” opposite of Jon Jones and face him for the light heavyweight title in April 2013.

UFC 155 will be headlined by the UFC heavyweight title fight between Junior dos Santos and Cain Velasquez. Dos Santos became the new heavyweight champion last November with a first round KO over Velasquez at the UFC on FOX 1 event.

3 thoughts on “Phil Davis vs. Forrest Griffin set for UFC 155”