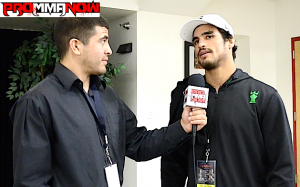 The BJJ invitational was held at San Diego State University and featured match-ups between several of the world’s top Brazilian Jiu-Jitsu black belts. There were no points, the matches had a time limit of 20 minutes and the only way to win was via submission or the fight was declared a draw.

Kron and Otavio fought for nearly 17 minutes in a highly technical gi bout before Kron finished him via a very quick armbar. Kron is the youngest son of Rickson Gracie and the grandson of Grandmaster Helio Gracie. You can follow Kron Gracie on Twitter at @KronGracie and visit his website at www.krongraciejiujitsu.com.

Check out the match between Kron Gracie and Otavio Sousa, as well as the rest of the Metamoris matches here: The Metamoris videos.