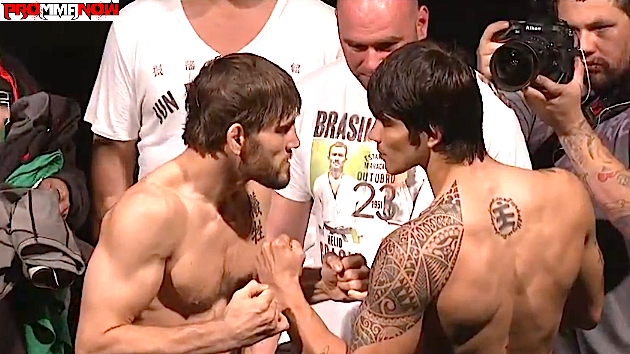 UFC Brazilian welterweight Erick Silva had the biggest fight of his career on Saturday night at UFC 153. He had all types of momentum to take him over the hump and become a legitimate title contender in the stacked welterweight division.

All he had to do what defeat a former number one contender who was coming off a ten month layoff, a 12 second KO loss in his last outing, and do it in front the hometown crowd in his native Brazil.

Jon Fitch ran through him en route to a unanimous decision victory.

It was the perfect storm for Silva who many, including myself, had pegged to defeat Fitch on Saturday night. However, I laid it out for you in my pre-fight preview:

The only way I see Fitch winning this fight is if Silva comes into the fight unprepared to fight for three full rounds with Fitch winning another judges decision. It’s possible that Fitch could wear him down and submit him late in the fight as well since Fitch’s grappling is somewhat underrated. However, I don’t think Fitch will be able to take Silva down and keep him there. He’ll need to close the distance and clinch with Silva and take him down from there which is something that Fitch excels at. He fights ‘ugly’ and it’s the type of style that could give Silva problems since Silva depends on his speed and explosiveness most of the time.

Silva simply needs to keep the fight on the feet and use his speed and agility advantage to land effective strikes against Fitch. He’s the more accurate striker and has excellent takedown defense according to Fightmetric. However, Silva does get flashy at times with spinning back kicks and flying knees, and he may not want to attempt those type of moves against a savvy veteran like Fitch.

Silva attempted a flying knee(it landed) just a minute into the first round and found himself with Fitch latched onto him for the majority of the fight.

UFC President Dana White called the fight a Georges St. Pierre vs. Matt Hughes moment. He’s referring to the first of the three fights between those two fighters. GSP was in awe of Hughes who was the former welterweight champion at the time. GSP was holding his own against Hughes before tapping out to a kimura at the very end of the first round. However, GSP went on to fight Hughes two more times afterwards, finishing him and ushering his own era of dominating the UFC welterweight division.

It remains to be seen how Silva will come back from the loss. He was competitive during the first two rounds, however, Fitch absolutely dominated him in the final frame. Fitch landed 112 total strikes in the third round compared to two for Silva, with 58 of those strikes being counted as significant strikes compared to zero landed by Silva.

Silva is still only 28 years old and coming into his physical prime, whereas a fighter like Fitch will be 35 years old in a couple of months. There’s no shame in losing to a fighter like Fitch who has only lost to the best of the best welterweights in the world. However, Fitch did expose a few holes in the game of Silva that others will look to exploit in the future.It’ll be interesting to see who they match Silva with next. I think a fight with someone like Diego Sanchez would be a good test.

Do you guys think Silva will bounce back and eventually become an elite welterweight?

4 thoughts on “UFC 153 analysis: Will Erick Silva rebound from loss to Jon Fitch?”