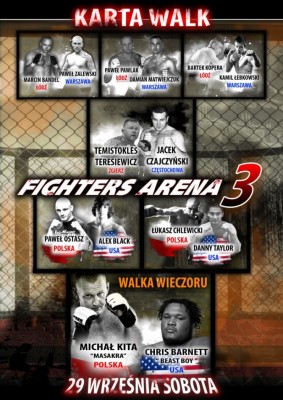 Fighters Arena 3 featured three bouts billed as Lodz vs. Warsaw and three fights billed as Poland vs. USA. In addition, there was the K-1 fight, a superfight and a heavyweight main event match-up between Michal Kita vs. Damion Martindale.

Here is the event recap.

Kamil Boszko from Copacabana Warsaw outpointed Lodz’s native Grzegorz Ocholik in K-1 amateur match. Over the course of three two-minute rounds Kamil was the better striker and had opportunity to finish the fight, but Ocholik proved that he has a lot of heart and went the distance.

In the main card BJJ brown belt under Robert Drysdale, Marcin Bandel from DJJ Lodz submitted Krzysztof Morzyszek from Bellator Warsaw with a heel hook in round one. Krzysztof started well with an elbow to the face, but Bandel, who was fighting in his hometown, immediately took him down.

Marcin tried to pass the guard, but ate a couple shots from back. Krzysiek made forced the scramble and was close to applying a triangle choke. When the first minute passed the Warsaw fighter tried  for a heel hook, but forgot to secure his own leg and Marcin was able to secure a counter heel hook
and finish the fight at about the 1:30 mark. (Lodz vs Warsaw 1:0).

The secound bout was Warsaw’s Shamil ‘Hatab’ Iliasov vs. Lodz’s Pawel Pawlak. The Chechen fighter started with a flurry but was not able to keep the pace. After several exchanges the Gracie Barra Lodz reresentative took Iliasov down and worked with elbows from the guard. Ilasov stood up at the end, but was not able to do damage with punches and a takedown on his own.

The second round showed how exhausted Iliasov was. Pawlak immediately took him down and opened a cut after several elbows from side control and mounted crucifix. Referee Konrad Bronowicki was forced to stop the fight because of cut and lack of activity of from the Chechen. (Lodz vs. Warsaw 2:0)

The last match between Warsaw and Lodz was a featherweight showdown between Bartosz Kopera from United Gym Lodz and Kamil Lebkowski from Okninski Team Warsaw. The fight was so close. Fighting in front of his home crowd Kopera won the first round with a few successful takedown attempts and some good shots on the ground.

After the first round Kopera started to slow down and Lebkowski took advantage. Warsaw’s native fighter boxed better than his opponent and treated him well with big punches at the end of the second round.

In the third Kopera was able to took Kamil down, but the Warsaw fighter nearly submitted him with triangle armbar. Kopera almost tapped, but was able to escape and control the rest of the fight. He was very tired and not able to do much damage, so in the end Lebkowski won via split decision. (Warsaw vs Lodz 2:1)

The fourth fight was the worst of all; two heavyweights do some jogging and walking in the cage. Jacek Czajczynski from Czestochowa and local fighter Temistokles Teresiewicz exchanged some punches for 15 minutes. In the end Czajczynski was awarded the unanimous decision victory because he had crowd behind him and was more aggressive than ‘Temil’.

In an action-packed match between Greg Jackson’s academy visitor Alex Black and Pawel Ostasz, the American was able to force the Pole to submit due to hip injury. At the beginning Ostasz seemed to be the better fighter but he landed few significant strikes. As time passed the Gracie Barra Tychy
fighter started to slow down due to Alex’s middle kicks.

The American tried to axe kick and a lot of middlekicks which damaged the Pole. Bushi Ban’s representative took Ostasz down in the middle of the first round and passed his guard, but was not able to mount Ostasz. In the second round Black continued to hurt Ostasz with body kicks and the fight was ultimately stopped in the third via TKO due to a hip injury.

In the co-main event Danny Taylor from USA showed a lot of heart against one of the best European welterweights, Lukasz Chlewicki from Cracau. The Pole dominated the whole fight with many good punches, judo throws, takedowns and submission attempts. He tried everything: Keylock and
armbar in the first, rear naked choke in second and heel hook in third. Taylor defended him well and gave Polish fans a very good fight. It was Lukasz Chlewicki’s retirement fight, he is 37 years old.

In the main event Bellator veteran and the best European heavyweight, Michal ‘Masakra’ Kita defeated Damion Martindale in the very first round by TKO. Kita started with a front kick to the face but when they clinched the American was able to take Michal down. The Pole worked from half guard and was able to force a scramble. Than he went for a toe hold but was unsuccessful with that attempt.

Michal secured top position and hooked his legs to secure back mount. Then he started to punch
Damion and his corner stopped the fight. Damion showed great warrior spirit because he took that fight with 24 hours notice due to Chris Barnett’s passport troubles.

Here are the full results for Fighters Arena 3: