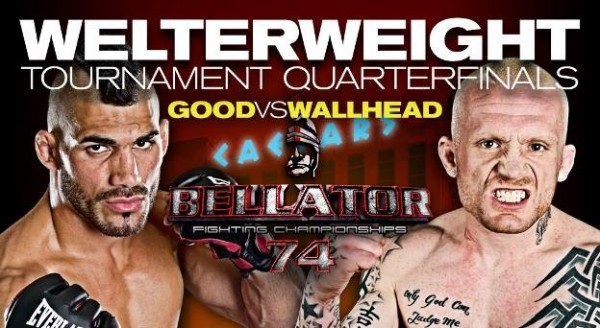 Bellator Fighting Championships returns for what appears to be their last season on MTV2 before moving to Spike TV. The seventh season kicks off with Bellator 74, which takes place Sept. 28 at Caesars Atlantic City. The card features the quarterfinal round of the season’s welterweight tournament as well as some familiar Bellator veterans in one off bouts.

Welterweight Tournament Quarterfinal
Lyman Good vs. Jim Wallhead
Wallhead makes a living by being an above average grappler. On the European circuit, he can hold most guys down and possibly score a submission. Recently, he has picked up victories over aging veterans Frank Trigg and Joey Villasenor with pretty much that same recipe.

On the other hand, Good seems to best everyone except the top end of the sport, or at the least the top end of Bellator. His only two losses have come against Ben Askren and Rick Hawn, and the Hawn loss was very close. Good should be able to do a lot of damage with his striking game and use his wrestling in reverse to stay on his feet. Look for Good to move on and become a favorite in this tournament.

Welterweight Tournament Quarterfinal
Michail Tsarev vs. Tim Welch
Since Dana White made it cool to talk about Bellator contracts, it is somewhat shocking that no one has made a big deal about Tim Welch being list on the website for the World Series of Fighting. Saying “Tsarev has not faced the best competition” is an understatement. The two best fighters on his resume are Gustavo Picone and Kyacey Uscola (or as I like to call him ProMMANow blogger Kyacey Uscola). Picone is basically a straight grappler and he has enough to score a submission. Tsarev did defeat Uscola, but the TUF vet is in the midst of a rather serious slump at the moment. Look for Welch to be able to get takedowns in this fight. Even if he can’t, he is the much more physical fighter and should be able to earn a decision victory.

Welterweight Tournament Quarterfinal
Jordan Smith vs. Andrey Koreshkov
Every once in a while, Bellator will put together a fight that makes would-be prognosticators cringe. This is such a fight. On one side, Smith has an ugly win over the reanimated corpse of Karo Parisyan and losses to two lesser Zuffa veterans, Josh Burkman and Tim McKenzie. On the other side, Koreshkov is an Alexander Shlemenko training partner whose biggest win is a knockout of Kyacey Uscola. Koreshkov should be the favorite, because he is a superior striker. However, Eastern European fighters are almost always a mystery on the ground.

Welterweight Tournament Quarterfinal
Nordine Taleb vs. Marius Zaromskis
Bloody Elbow picked Taleb as one of the welterweight prospects of 2012 besides the fact that he is already 30 years old and has yet to really break into a major promotion. He throws flashy strikes, but guys who stand on the outside and throw with the Zaromskis rarely give the Lithuanian trouble. On top of that, Taleb is a Tristar guys, which means he will probably forgo jabs and set-up strikes and instead go for the homerun shot throughout the fight. Look for Zaromskis to get the better of the exchanges and take the decision in an exciting fight.

Alexandre Bezerra vs. Jeff Smith
Smith has picked up some pretty solid wins on the Pennsylvania circuit, but he is taking a big step up in competition here. Bezerra has a nasty and effective submission game, which should carry him to victory here. In his last fight, he dropped a split-decision to Marlon Sandro, but he still showed that he can throw down on the feet if he has to. Bezerra should be able to pick up a submission victory.

Derrick Kennington vs. Phillipe Nover
Some fans might be surprised to learn that “the next Anderson Silva” is still actually competing in MMA. Since reaching the finals of the eighth season of “The Ultimate Fighter” he has put together a paltry 1-4 record. In his last fight, he dropped a split decision to polish youngster Marcin Held in his Bellator debut. The TUF vet may never live up to unrealistic expectations, but he should be able to pick up a victory here. Nover can either stay on the outside and land strikes or probably even submit Kennington on the ground.