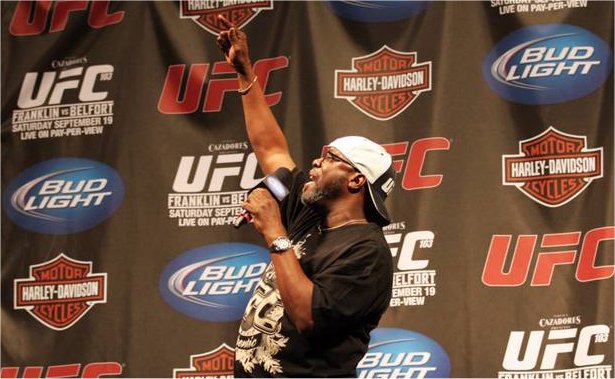 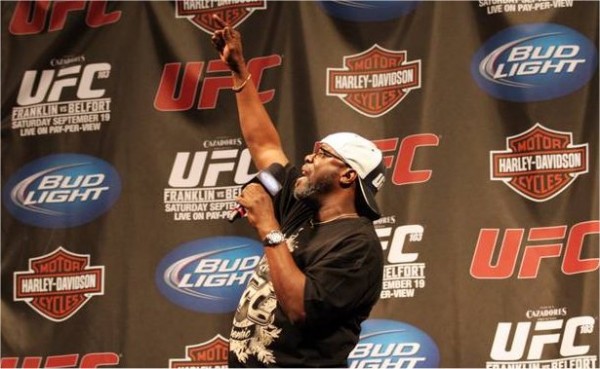 For some MMA fans, the cancellation of UFC 151 was one of the biggest disappointments of the year and sparked some serious debate about who was truly to blame for the debacle. For UFC site coordinator Burt Watson, it was a blessing in disguise.

The UFC’s “Hype Man” came on as site coordinator way back at UFC 30 and has only missed two events since. As UFC 151 was fast approaching, Watson found himself increasingly suffering from a double hernia — something that had been bothering him for months. Once word came down that UFC 151 was being canceled, Watson took the opportunity to finally have surgery, one that was complete just in time for him to fly to Toronto for UFC 152.

It takes a tenacious man to jump on a plane and fly out of the country just a week removed from a painful surgery that would sideline most men half his age, but the former Marine never doubted that he would be ready to keep his streak going.

“I’m not planning to go any place anytime soon,” Watson told FIST-ta-CUFF radio of the ProMMAnow radio network. “I’m here now after surgery 7 days ago, that shows you that you know what, like a Marine you got to take me down hard baby.”

On the eve of UFC 152, the “babysitter to the stars” has been on the ground for several days in preparation to do what he does best — all with his trademark “baby” that can be heard around all of the pre-fight activities that make up fight week. He is there to ensure everything is in order from getting the rooms, scheduling arrivals, organizing the airport pick ups, and all of the transportation needs between the different venues that make up fight week.

Despite the huge logistical responsibility that Watson oversees, his energy and enthusiasm never wane. The former Marine credits his time in the military as a valuable experience that has molded him into who he is today.

“I’m proud to have served my country,” Watson said. “I love the military. I love the men and women that are serving us now. I take pride in it because not only did it help me serve my country, but it allowed me to lay the ground work and doing what I do now which is to kick ass and take names baby.”

“MMA has gotten to a point baby where it has just taken off, it is massive. The fan base is unbelievable, the technical skills of the guys have just gotten to a point that is unbelievable. I’m here. I leave here and I go to Nottingham, then to Minneapolis. From Minneapolis to Rio. That’s worldwide. When you get something like that, it takes a lot of maintenance. It takes a lot of legwork and a lot of babysitting to make sure that all of that happens baby.”

Back at UFC 30, things were much different. Watson compares those days to a “mom and pops” operation. As the operation grew and expanded, so did Watson’s role with the company. Processes and procedures were put in place, and as the UFC took off, those processes evolved and Watson’s staff grew to what it is today.

“Now that it’s gotten to a place that we got so many shows and the company has grown, there are a lot of things because of the size of it, that we have to farm out,” Watson said.

“You know what’s crazy baby? We are moving so fast sometimes, that I know where we are going when I hear it from you guys. It’s exciting and it’s the kind of thing that motivates me and keeps me going. I’m like any other big kid. Even though they kind of call me the ‘babysitter to the stars’ — and I do a lot of babysitting with these guys — I look forward to going to different places.”

Watson is loved by the UFC’s roster of fighters, and most of that stems from the way he treats them. “Respect” is the word Watson uses, and he expects it right back. In turn, he ensures that every fighter is treated equally, from the first under card fighter all the way up to the biggest stars in the UFC that headline the biggest events. The respect doesn’t end with the fighters however. Watson extends his services out to the entire fight camp including the cornermen, coaches, management, and of course to the fans.

Attention to detail is critical to Watson, and his process includes ensuring that the workout rooms are clean and warm, to making sure that hands are being wrapped in time for preparation of the upcoming battle. In the end, it’s all about a level of comfort for that fighter.

“When it comes to fight week, everybody’s got one goal. One job and one or two consequences. You win or you lose, but everybody gets in that cage the same way. Everybody takes that long walk to the cage. Everybody has to be at a certain level to get in that cage and they got to have a certain comfort level to know that all that is supposed to be in their head is getting in the cage, and you can only do that if you start on the same page baby.”

Watson and his doctors are on the same page when it comes to him getting back into action. They cleared him to fly to Toronto, but told him to take it easy lifting, reduce his stress, and to not yell. The last of which, will prove to be very difficult for Watson as he belts out his trademark phrases leading up to the fights.

A double hernia surgery may have slowed him down for the time being, but it’s clear that Watson will be around doing what he does for a long time to come. 12 years of countless UFC events are just part of the legacy of Burt Watson. The rest of his story has yet to be written.

“I’m not planning to go anyplace anytime soon. I ain’t going nowhere, so I hope to give you and everybody else the same joy I been giving for 12 years. I’m already old, but I’m going to keep on keeping on. I’m not giving it up easy. I’m going to go kicking and screaming, and you are going to have to come in here and get a butt whooping. It’s what we do all night long baby.”