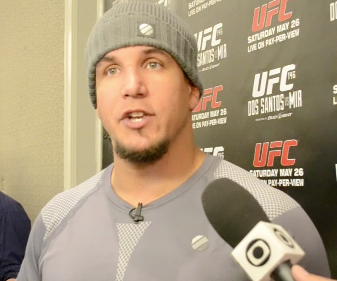 A knee injury has forced former UFC heavyweight champion Frank Mir to withdraw from his Strikeforce main event bout against Daniel Cormier according to Strikeforce officials. The two heavyweights were scheduled to main event the November 3rd Strikeforce event that will take place in Oklahoma City. The Strikeforce promotion is currently searching for a replacement and will make that announcement shortly.

Frank Mir (16-6) is coming off the second round TKO loss against Junior dos Santos in his quest to regain the UFC heavyweight title at UFC 146. Daniel Cormier (10-0) is coming off the dominant unanimous decision win over former UFC heavyweight champion Josh Barnett. Cormier was able to complete that task even though he broke his hand in the first round of that bout. Mir was thought to be a big named opponent who’s also a top ten heavyweight. If he would have beaten Mir, it would have been THE signature for Cormier at this stage in his career.

There is a list of potential opponents out there for Cormier to fight as a replacement. Be sure to stay tuned to ProMMAnow (www.prommanow.com) for future updates on this situation.