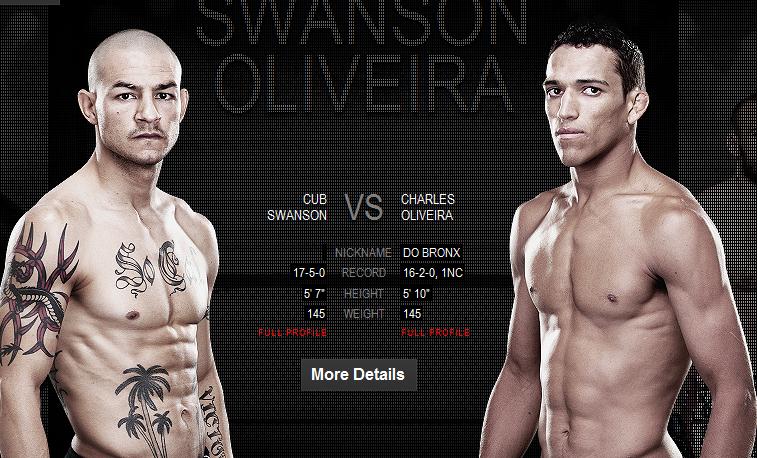 It has been an eternity since the last UFC event, but that eternity will come to an end on Saturday night with UFC 152. The main card will be kicked off by a featherweight fight between Cub Swanson and Charles Oliveira. This fight will definitely be a candidate for “Fight of the Night” honors. Let’s see how it breaks down.

Cub Swanson (17-5) comes into this fight winning his last two fights via TKO. Swanson was last seen in action in June as he took out former TUF winner Ross Pearson in the second round. Swanson is an exciting fighter with seven wins via submission and six wins via TKO to his credit. However, three of his five losses have come via submission.

Charles Oliveira (16-2, 1NC) comes into this fight also winning his last two fights in the UFC. Oliveira was last seen in action choking out former TUF winner Jonathan Brookins in June. Oliveira has nine wins via submission and six wins via TKO. He has also won three “Submission of the Night” awards since arriving in the UFC in 2010.

This fight will probably primarily become a striker versus grappler matchup. Oliveira is the taller fighter with a reach advantage, but Swanson is probably the stronger fighter physically. Swanson will look to keep this fight on the feet while attempting to punish Oliveira with strikes. However, Oliveira is capable on the feet as well. According to Fightmetric both fighters land about 47% of their strikes with Swanson having the better takedown percentage.

I think we can throw that last part out the window. It should be noted that Oliveira isn’t afraid to pull guard against his opponents, and he has an extremely active guard. So don’t be surprised if Oliveira does just that if he’s getting lit up on the feet. It should be noted that Oliveira has only been finished via TKO once in his career, and that came against Donald Cerrone in August 2011.

I like Oliveira in this fight. I think his chin is good enough to take shots from Swanson. I think he might pull guard and I could see him having success there as well if he decides to do that. It’ll also be interesting to see if the reach advantage he’ll have will pose problems for Swanson. One certainly can’t overlook Swanson in this fight as he has very good power and fights pretty aggressively. However, I think Oliveira gets it done here in what should be a great fight to kick the show off with.