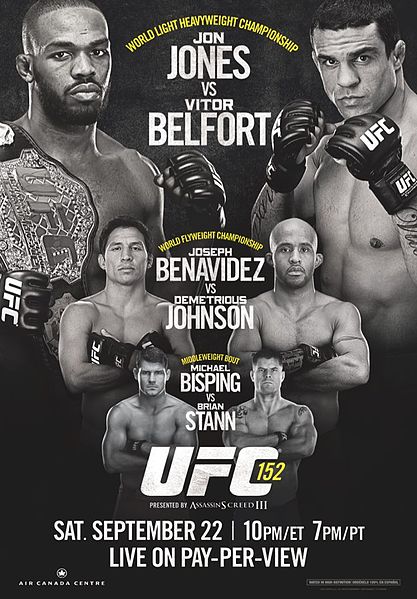 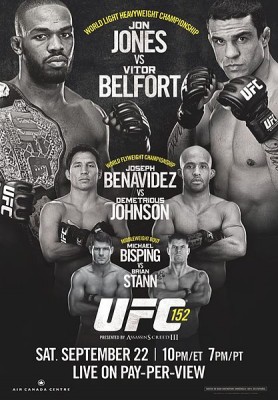 It seems like it has been forever and a day since UFC 150 took place on August 11th, and it has been if we are talking normal UFC events these days.

UFC 152 will take place on Saturday night while being headlined by the UFC light heavyweight title fight between Jon Jones and the challenger Vitor Belfort. There are some interesting questions heading into this event, but I want to take a look at the top five and get your thoughts on them.

There been over a month with no UFC action. This event has two title fights on the line. The light heavyweight champion Jon Jones has been in the media headlines every since UFC 151 got canceled, and it’ll be interesting to see if his star power rises or falls flat. Granted, the first two factors I pointed out probably have more bearing on what PPV buyrate this event does than Jon Jones. However, the UFC needs a very solid event to rebound from UFC 151 debacle, and the fact that UFC 153 lost the title fight in the main event. Jones has never done less than 480,000 PPV since he has been champion.

Will Michael Bisping cement himself as the number one middleweight contender against Brian Stann?

Bisping has been in the game for a long time, and has improved his game quite a bit over the years. I think most people forget that Stann will be the first ranked opponent that he has fought since Dan Henderson at UFC 100? Bisping hasn’t done well against guys with big power(he was knocked 0ut by Henderson in highlight reel fashion), and Stann certainly had the power to put him away. Bisping has better all around skills though, but does he become the number one guy with an impressive win over Stann? He talks a good game, has good name recognition amongst most fans, and has never had the opportunity to fight Silva.

What if Vitor Belfort defeats Jon Jones at UFC 152?

I just wanted to link back to the question that was asked a few day ago by our very own Jack Bratcher. Belfort is a huge underdog, but has knocked guys out before. If Jones were to lose to Belfort, do you think the UFC would grant Jones an immediate rematch?

Who would be the better UFC flyweight champion between Joseph Benavidez or Demetrious Johnson?

Of course the UFC will crown their inaugural flyweight champion at UFC 152 on Saturday night. These two fighters are tremendous fighters and this should be a very entertaining scrap this weekend. However, which fighter between the two do you think has the best opportunity to be the more dominant champion? Another way of asking that question is who will be able to defend the newly crowned flyweight title the most before suffering a defeat?

Could the winner of the Jimy Hettes/Marcus Brimage fight become a darkhorse contender in the UFC featherweight division?

Hettes is undefeated at (10-0) with two consecutive UFC wins to his credit. Brimage (5-1) also has two consecutive wins to his credit. The UFC featherweight division is in a bit of a flux right now with Aldo beating quite a few of the contenders. The winner of this fight could get a fringe top ten featherweight in their next bout. It’ll be interesting to see how this one plays out.