What if Vitor Belfort defeats Jon Jones at UFC 152? 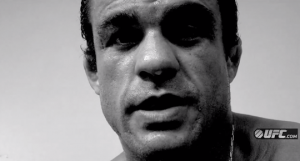 Next week 35-year-old Vitor Belfort will get a shot at Jon “Bones” Jones and his UFC light heavyweight title. Jones is 10 years younger than Belfort, he has an incredible reach advantage, and the odds-makers have Jones a huge favorite at -925, with Belfort at +625.

But guess what, Belfort says he could care less about your prediction for this fight. He doesn’t care what you think. Belfort says all that matters is what he thinks — and I have to admit, the guy looks pretty darn confident.

About five years ago there was a man named Matt Serra who was fighting Georges St-Pierre for the welterweight title and nobody thought he could do it either. UFC 152 takes place September 22 at the Air Canada Centre in Toronto, Ontario and airs live on Pay-Per-View.

What do you think fight fans, does Vitor have what it takes to shock the world?

3 thoughts on “What if Vitor Belfort defeats Jon Jones at UFC 152?”