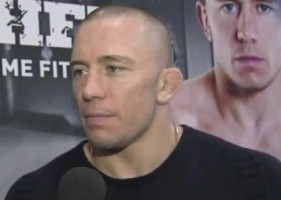 Hey, remember the UFC welterweight champion? Sure you do — Georges St-Pierre. The dude has held the UFC’s 170-pound title for FIVE YEARS! That’s sick.

However, last December, while preparing for a highly-anticipated match with Nick Diaz, the champ tore his ACL and had to undergo surgery. Now, close to a year later GSP is healed up and ready to go.

His first fight back will be against Carlos Condit on November 17 at UFC 154 in Montreal. First of all, the Canadian UFC fans are going to go bananas to see their resurrected star, but Condit is a tall order for anyone, especially for someone who has been out of action for so long.

Is this a smart “business move” for the champ? Or is it just the nature of the game?

I don’t guess champions get the luxury of a “tune-up” fight, eh?

Georges’ trainer, Firas Zahabi of TriStar gym, told Sherdog Radio he wished Georges’ could have waited a bit longer before taking the fight:

“It was tough. I would have preferred, obviously, if he could have waited a little longer. I think it would have been the best, more ideal, but Georges really wanted to fight. The fans wanted to see him fight. The fight’s coming to Montreal. I told Georges, ‘Let’s do one last sparring. Let’s see where you’re at in sparring.’ And he did great. He went all his rounds. He went with every UFC fighter. He looked fantastic, and we said, ‘Look, you’re ready. Let’s do it.’”

It’s interesting the odds for the fight are set at -365 for Georges and +275 for Condit. Personally, I think that’s a little nuts for someone who will have not fought for a year-and-a-half when he steps in the Octagon on November 17.

If you’re into the betting thing, I recommend taking Condit on those odds.

You can never underestimate GSP, and his wrestling could definitely prove to be the determining factor in the bout. But you know Condit is working hard to prepare for the wrestling, he’s already taken out George’s protege Rory MacDonald, and Condit is working with coaches at Jackson’s who have been around Georges and know his game.

So who you got?