Dana White: ‘I wonder how the piece of meat was feeling when we bought him the Bentley?’ 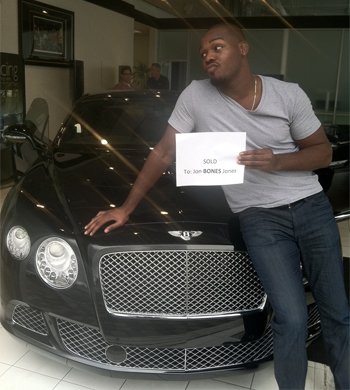 UFC President Dana White was making the media rounds today and took time to speak with Jim Rome about the Jon Jones UFC 151 situation. Rome asked White about a statement Jones had made during an interview with Ariel Helwani last week in which he said the whole thing had made him feel like a “piece of meat”.

Rome asked White how it felt to hear one of his champions say he felt a “piece of meat”.

“I wonder how the piece of meat was feeling when we bought him the Bentley? I don’t know. That statement right there drives me insane. A year-and-a-half ago nobody knew who Jon Jones was. Now the kid’s a multi-millionaire, he’s got this, that… a piece of meat? Let me tell you what, I know some people who are in some jobs that feel like a piece of meat. Jon Jones is far from being one of them.”

One of Rome’s listeners called in during the show who happens to be a low level MMA fighter. He seemed offended by Jones’ attitude and said he fought on a card not long ago in which he was paid a whopping $50. He made the point, “If Jones is a piece of meat, he’s Kobe beef and I’m bologna.”

6 thoughts on “Dana White: ‘I wonder how the piece of meat was feeling when we bought him the Bentley?’”