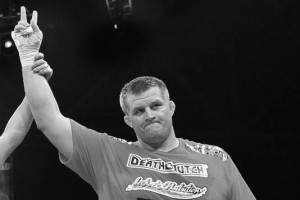 — former Bellator Heavyweight Champion Cole Konrad (9-0) has retired at the ripe old age of 28. We told you that yesterday. The former University of Minnesota NCAA wrestling champ began his pro MMA career in January 2010 and went a perfect 9-0, winning the inaugural Bellator heavyweight title in the process.

A former training partner to Brock Lesnar, Konrad fought under the tutelage of “the Maestro” Marty Morgan with Team Death Clutch.

Bellator issued a press release today with a statement from Konrad:

“This decision has been on my mind for a while, and the time was finally right to make the move. I wrestled my whole life and it was one of the only things I ever knew. When my college career was over, MMA seemed like the natural progression, but it was never really my passion. I thoroughly enjoyed my time inside the Bellator cage, but having the consistency and stability of going to the office every day is something that just made sense to me.”

It is interesting to note Konrad says, “…but having the consistency and stability of going to the office every day is something that just made sense to me.”

Of course it makes sense. Everyone has to earn a living and provide for themselves. One has to wonder if Konrad had been fighting more than once a year for the last two years this would not have happened.

Look at this. Konrad fought SEVEN times in 2010, his first year fighting professionally! He came out of the gate like a bull, running down his competition. Nobody ever really even came close to stopping him or even presented much of an opposition. Sure, a few guys went the distance — but Konrad won every decision unanimously.

So, after fighting seven times in 2010 and winning the Bellator title, he fought one non-title bout in 2011 and defended his title once in 2012. Bellator has a heavyweight tournament planned for their upcoming seventh season, but it would have likely been sometime in 2013 before he would have been able to defend his title again. That could not have possibly been any sort of motivation to not hang it up.

Bellator is moving to Spike TV in 2013 and are planning to hold more tournaments each year, so there will be a faster turnaround for producing no. 1 contenders — in the meantime though, the sport has lost a very promising, and yet largely untested talent.

What if Konrad could use “retirement” as a way to get out of his Bellator contract, then make a comeback somewhere down the road — possibly with another promotion such as the UFC? Konrad might soon find out sitting behind a desk 40+ hours a week as an agricultural commodities trader is “not really his passion” either.

Konrad did say if he decides to return to fighting, it would be with Bellator:

“I can’t say enough good things about my time with Bellator. I enjoyed every second of my time in the cage, and having a boss like Bjorn was a pleasure. Bellator does things the right way, and if I ever find myself back in the cage, there is no doubt in my mind it will be with Bellator.”

Bellator front man Bjorn Rebney commented on losing their heavyweight champion and where they go from here:

“There are very few fighters in MMA who can completely control a fight like Cole Konrad could,. Cole’s a very smart and gifted individual, who will continue achieving excellence in everything he does. I wish Cole, his wife and family the very, very best as he moves into this new stage of his life. Cole was a great Bellator Champion, and now Sam and I will determine exactly how and when the new Bellator Heavyweight Champion will be crowned.”

What say you fight fans, is this Bellator’s fault or did Konrad somehow overlook his true calling?

2 thoughts on “Cole Konrad: ‘MMA was never really my passion’”