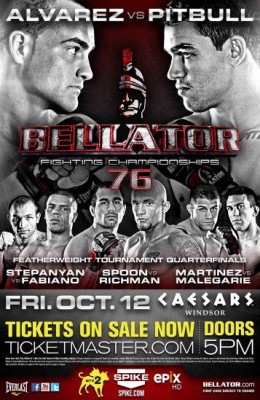 The Bellator promotion has finalized a stacked night of fights that include the highly anticipated lightweight showdown between Eddie Alvarez and Patricky Pitbull, as well as the Season Seven Featherweight Tournament at Bellator 76 on October 12th.

The event will broadcast LIVE on MTV2 and in commercial-free HD on EPIX starting at 8 p.m. EST, as well as mun2 in Spanish language. The preliminary card, featuring some of the area’s top local talent will be streamed LIVE and FREE on Spike.com, with doors opening for the event at 6pm EST.

Alvarez (23-3) is coming off his first round TKO win over Japanese standout Shinya Aoki at Bellator 66 in April. The win avenged an earlier loss for Alvarez, and also got him back on the winning track after losing his Bellator lightweight title to Michael Chandler at Bellator 58.

Patricky Pitbull (10-3) is coming off a second round submission loss to Lloyd Woodard at Bellator 62. Pitbull has notable wins over MMA veterans Kurt Pellegrino, Toby Imada, and Rob McCullough.

“Eddie and Pitbull are two of the most explosive, dynamic Lightweights in MMA.  This is a fight I’ve wanted to see for the last two years,” said Bellator Chairman & CEO Bjorn Rebney. “Our Featherweight Tournament features eight world class athletes with a combined 106-15 record that are always looking for the finish, so our fans in Windsor are in for a treat on October 12.”

Also on the card Russian import Akop Stepanyan will make his United States debut as he battles Nova Uniao product Wagnney Fabiano. Two Bellator newcomers will round out the Season 7 Featherweight Tournament as Shahbulat Shamhalaev will take on California featherweight Cody Bollinger. Only 21, Bollinger boasts a 13-2 record and is primed to make his mark inside the Bellator cage

The main card can be found below:

One thought on “Bellator 76: Alvarez vs. Pitbull, Featherweight Tournament set for October 12th”