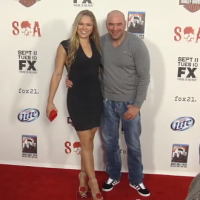 There are certain perks that come along with being the most powerful man in pro mixed martial arts. You can do such things as call up Ronda Rousey for a date to the season premiere of a show she’s never even watched and she will say “yes”.

The Bald Father aka Dana White was snuggled up with Strikeforce women’s bantamweight champion Ronda Rousey as they strolled the red carpet for the season five premiere of Sons of Anarchy at Westwood Village Theater in Westwood, Calif. on Saturday night.

We all know FX’s Sons of Anarchy is completely badass. It’s only fitting a badass like Ms. Rousey should be there. However, do you think this is strictly business with her Zuffa boss, or there’s more to it?