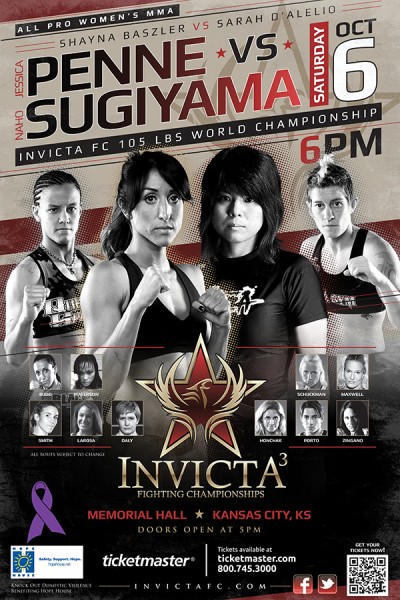 Kaufman is coming off a highly publicized 54-second submission (armbar) loss to current Strikeforce women’s 135-pound champ Ronda Rousey earlier this month. It was Kaufman’s only second loss in her six years fighting as a professional.

Prior to that Kaufman had won three straight bouts, defeating Megumi Yabushita via TKO, and defeating Liz Carmouche and Alexis Davis both via decision.

Due to the relative infrequency of their fight cards, Strikeforce has been good about letting fighters such as Kaufman take bouts in other promotions so they can continue to earn a living.

“Invicta FC has made huge waves for women in MMA over the last five months,” Kaufman said.  “It’s been amazing to watch so many of the top women all fight on the same card, so I’m looking forward to be a part of their next show. Kaitlin is a very strong 135-pounder. She’s got a lot of height and is quite technical in many areas.  I’m excited to get in there against her, especially in the wake of the worst performance of my career.  I’m hungry to get back in there and prove why I’m ranked at the top of my weight class.”

Young has fought on both previous Invicta cards; fighting to a draw in a “fight of the night” performance against Leslie Smith in April and dropping a second round submission to Liz Carmouche in July. Prior to that she had put together back-to-back TKO victories on the regional circuit, defeating Liz Carreiro last October and Anna Barone in January.

Young first earned her reputation as a powerful striker by knocking out three women in one night, including a 30-second head kick KO of Miesha Tate, to win the 2007 Women’s HOOKnSHOOT Grand Prix.

“Sarah is a great fighter who has made a big name for herself in the sport, so I’m looking forward to the challenge,” Young said.

The card also contains several other veterans and a host of up-and-coming and debuting female fighters ready to make their mark on women’s MMA.

The complete and enormously stacked 14-fight Invicta FC 3 card is as follows: