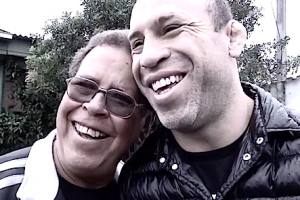 We are sad to report the death of Orlando Pinheiro da Silva, the father of UFC middleweight star and mixed martial arts legend Wanderlei Silva, who died in a head-on collision Sunday between the cities of Castro and Abapã near his home in Brazil. The driver of the other car was also killed and a child passenger is in serious condition according to Brazilian news reports.

The body of Orlando Pinheiro da Silva was taken to the Forensic Institute of Ponta Grossa, in the Campos Gerais region. Burial will be in Abapã. Wanderlei Silva was in Las Vegas at the time of the accident and received the news via telephone. The fighter is traveling to  Paraná on Monday.

Just this past Wednesday Wanderlei had released the video below of himself visiting his Father and family in Brazil and taking cameras on a tour of his childhood home. He described his Father as a man who taught him the value of hard work and honesty and who worked three jobs to support the family when he was growing up. Fans can send their words of support to Wanderlei via his Twitter at @wandfc.