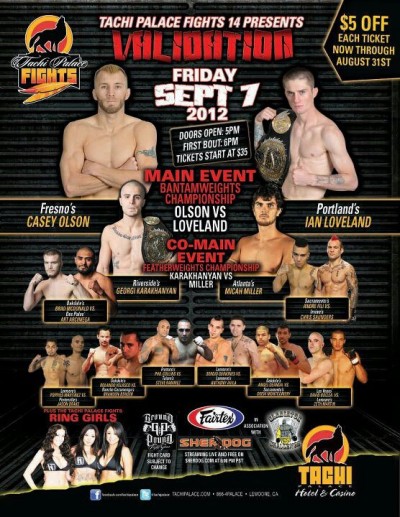 Olson (14-3), a WEC and Strikeforce veteran, is riding a three-fight win streak with his last two victories coming via unanimous decision against Shawn Klarcyk at TPF 4 and Cody Gibson at TPF 12. Olson is one of the area’s most popular fighters.

Armed with a strong wrestling background and training under the tutelage of John Hackleman at The Pit, another win here could put Olson very close to getting the call up to the big show.

Olson will be facing a fighter who has already been to the big show and is fighting to make his way back. An IFL veteran, Ian Loveland (15-9) made his UFC debut at featherweight on short notice against Tyler Toner at the TUF 12 Finale in December 2010. Loveland won all three rounds to take home the unanimous decision victory.

Loveland then dropped to bantamweight where he took on the very tough Joseph Benavidez at UFC 128 in March of last year. Loveland lost via unanimous decision. He fought once more in the UFC last August, dropping a split decision to Yves Jabouin at UFC 134 and was subsequently released from the promotion.

Georgi Karakhanyan (18-3-1) is a Bellator veteran who won the Tachi Palace Featherweight Title last December at TPF 11 by defeating Isaac DeJesus via Triangle Choke submission in the first round.

He has fought once since then, defeating Aaron Mobley via knockout at Gladiator Challenge in April. Karakhanyan has finished his last four opponents inside the first round; three via submission, one by knockout.

Micah Miller (17-4, 1 NC), younger brother of longtime UFC vet Cole Miller, is riding a three-fight win streak, however, he has not fought since 2010. Miller’s last two fights were under the Tachi Palace banner where he won a unanimous decision over Diego Saraiva at TPF 6 and scored a submission via neck crank stoppage of Isaac DeJesus at TPF 7.

The door to the UFC was opened for Miller last year when he was selected for The Ultimate Fighter season 14. However, that door quickly shut when he lost his preliminary bout to get in the house to Steven Siler via third round submission. Incidentally, Siler is currently 3-0 in the UFC.

The complete Tachi Palace Fights 14 card currently looks like this:

Tickets start at $35 and are on sell now. For more information on tickets visit www.tachipalace.com.