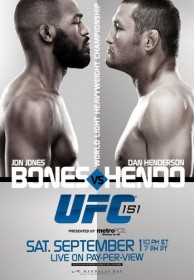 Henderson is currently on a four-fight win streak, having knocked out Renato “Babalu” Sobral, Rafael “Feijao” Cavalcante and Fedor Emelianenko, while in Strikeforce, and having won a unanimous decision against Mauricio “Shogun” Rua in his return to the UFC. Jones is on a seven fight win streak, with three wins coming via TKO, three via submission, and most recently, a unanimous decision over Rashad Evans.