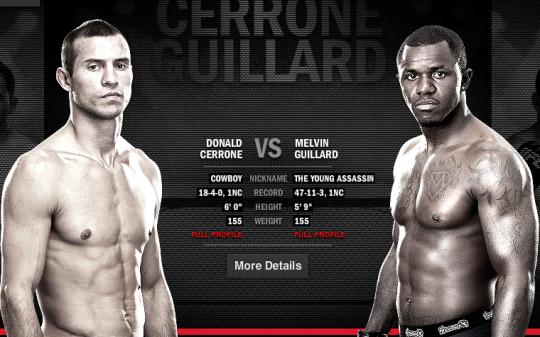 The UFC 150 co-main event will feature a lightweight fight between former training partners when Melvin Guillard and Donald Cerrone lock horns on Saturday night in Denver, Colorado. This should be a great fight between two dynamic fighters that are almost always in exciting fights. Let’s break it down to see who comes out on top.

Donald Cerrone (18-4, 1NC) comes into this fight off his unanimous decision win against Jeremy Stephens in May. He was coming off the unanimous decision beating put on him by top contender Nate Diaz at UFC 141. Cerrone is a technical striker with good kicks and is well versed in submissions when the fights hit the ground. He also has a granite chin and has only been stopped once, and that was against the current lightweight champion Ben Henderson when they fought in the WEC promotion.

Melvin Guillard (30-10-2, 1NC) comes into this fight off his unanimous decision win against Fabricio Cameos at UFC 148. It was a nice win for Guillard who had lost back-to-back fights prior to that fight. Guillard is a very gifted athlete with great agility and speed where he has the advantage over almost all of his opponents. He has knockout power but is extremely prone to submissions when on the ground throughout his career. He has 19 wins via TKO/KO and two submission wins to his credit, but 90% of his losses have come via submission.

Cerrone will have the reach advantage in this one but I don’t expect it to be that much of a factor. I expect Cerrone to start his combinations with his hands and finish them with leg kicks. I think we’ll see a ton of leg kicks from Cerrone as they will keep him out of Guillard’s range, slow Guillard down if they land, and potentially entice Guillard to go for a takedown where Cerrone will have the advantage on the ground.

Guillard should use his footwork to create angles and to dart in and out of the range of Cerrone. Cerrone does not fight well going backwards at all, so it would be in the best interest of Guillard to press the action. Cerrone mostly throws single counter right hands as he’s backing up as he isn’t able to get his kicks off effectively when retreating. Guillard can take Cerrone down anytime he wants, but he should avoid the ground at all cost. He’ll also need to keep his hands up and chin down as his chin is a little suspect at times. Cerrone doesn’t have huge power, but he has enough to stun Guillard if he connects.

I think it’ll be a fairly even contest for the first round or so because both fighters are familiar with one another since they used to train together. I think Cerrone is going to slow Guillard down quite a bit with leg kicks, and eventually Guillard will get tired of eating them and shoot for a takedown. Once on the ground I expect Guillard to lose concentration as he usually does and succumb to another submission.