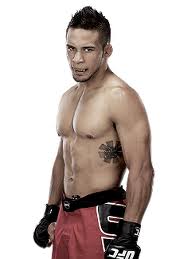 TUF 14 finalist Bermudez was last in action against Pablo Garza at UFC on FOX 3 in May where he grinded out an impressive unanimous decision victory. During the bout Bermudez showcased some great wrestling and proved that he has the cardio to go all three rounds. After losing against Diego Brandao in The Ultimate Fighter 14 finale, the win over Garza was a great way to bounce back and show both the fans and critics what he can do in the octagon.

Dennis Bermudez recently spoke to E.Spencer Kyte from the UFC about the Garza fight:

“During the fight, it seemed a lot more boring, but if you watch the fight, there were a lot of big slams,” laughs Bermudez. “I didn’t realize I had him that high. I just like to put on fast-paced performances, and I didn’t feel like I delivered the best fight I could have overall. I reached one of my goals – to get a UFC win. I’ve got bigger and better goals, but I knocked off one of the small, short-term goals.”

Before joining the UFC Bermudez competed on the regional MMA circuit, after fighting for various promotions around Pennsylvania and Oklahoma he got an opportunity to be part of The Ultimate Fighter reality show. He now finds himself making the transition from being a regular guy to becoming a UFC star with a chance to make a living solely from MMA.

“One of the biggest benefits that came from being on The Ultimate Fighter was not having to work a job while training,” he admits. “That’s a big struggle and problem for up-and-coming pro fighters – they don’t make enough money fighting to be able to just fight, so they have to get a side job or a full-time job. They have to find other revenue outside of what they’re getting from fighting because it’s just not enough. I’ve been there, done that, and got the t-shirt, and now I don’t. We’re not shipping packages at UPS anymore.”

Bermudez now has an opportunity to pick up a second consecutive win in the UFC and take another step up the featherweight ladder. This will be his first pay-per-view event for the promotion, which will give him a chance to shine on the preliminary card with a good performance. Hayden is coming off a loss and in desperate need of a victory so it is likely to be an exciting matchup.

“It’s a fight, so I’m going to go out there and fight. We’re going to throw leather at each other. If he tries to take me down, that’ll be a mistake, but right now I’m just trying to get better everywhere, and I plan on being dominant in every position.”

UFC 150 takes place this coming Saturday Aug.11 at the Pepsi Center in Denver, CO. Bermudez vs. Hayden will be part of the preliminary card on the night which will air on FX.

Stay close to Pro MMA Now (www.prommanow.com) for all the latest UFC 150 news.