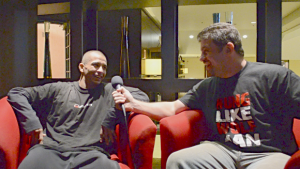 ProMMAnow.com’s Dan “The Wolfman” Theodore is on scene in L.A. for UFC on FOX 4 and sat down with UFC newcomer John Moraga (10-1) who makes his UFC debut Saturday night against Tachi Palace two-division champ Ulysses Gomez (9-2).

Moraga and Gomez will open the show with the very first fight of the night. Moraga commented:

“I think it will be a good fight to set the tone and I think we’re going to make the UFC real happy.”

Moraga, who trains out of Arizona Combat Sports and MMA Lab in Phoenix, talked about his fighting style, his training, the match-up with Gomez and what debuting in the world’s premiere mixed martial arts promotion means to him. Fans can follow John Moraga on Twitter @chicanojohn.

Be sure to check out our exclusive video interview with Moraga’s opponent: Interview: Flyweight Ulysses Gomez ready to make an impact in UFC debut.

2 thoughts on “Interview: John Moraga on making his UFC debut at UFC on FOX 4 *VIDEO*”