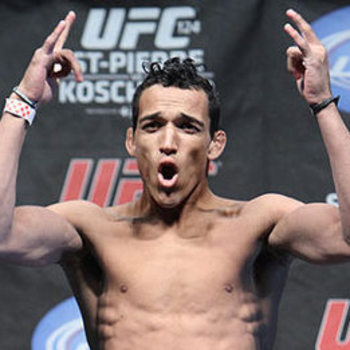 Two new fights have been added to the UFC 152 event as Cub Swanson (17-5) faces Charles Oliveira (16-2) in a featherweight matchup, and Dan Miller (14-6) takes on Sean Pierson (12-6) in a welterweight war. The event takes place at the Air Canada Centre in Toronto on Sept. 22.

UFC 152 features a headline bout between Joseph Benavidez and Demetrious Johnson who will battle for the inaugural flyweight title. The event will air LIVE on PPV with the prelims expected to air on Facebook and FX.

Cub Swanson is currently riding a two fight winning streak, most recently defeating Ross Pearson via second round TKO at UFC on FX 4 in June. Prior to that he picked up another second round TKO, but this time against George Roop at ‘UFC on Fox: Evans vs. Davis’ in January. He will has a chance to extend his win streak to three by beating the always tough Oliveira.

Charles Oliveira is also riding a two fight winning streak, most recently defeating Jonathan Brookins via second round submission at the “TUF 15” finale in June. Prior to that he beat Eric Wisely via first round submission at ‘UFC on Fox: Evans vs. Davis’.

Dan Miller last fought at UFC on FX 4 in June, where he scored a third round submission victory over Ricardo Funch. That victory snapped a two fight losing streak against Rousimar Palhares and Nate Marquardt during 2011. Miller now has the chance to get a second consecutive win by defeating Pierson.

Sean Pierson was last in action at UFC on FX 3 in June, where he scored a unanimous decision victory over Jake Hecht. Prior to that, in similar fashion to Miller, he was also on a two fight skid after losing to both Jake Ellenberger and Dong-Hyun Kim during 2011. A good performance against Miller will take Sean one step higher in the welterweight division.