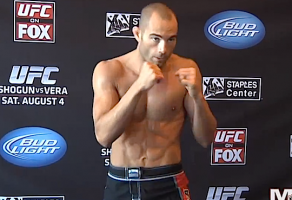 When Mike ‘Quick’ Swick walks into the Octagon across from DaMarques Johnson this weekend, it will be exactly two years, three months, and 30 days since he last set foot in the cage.

It’s been a long journey for the seven year UFC veteran to get back to this point; the last two years away from the sport have been wrought with hardship, but Swick’s resilience has brought him back into the welterweight mix.

Since his last Octagon appearance, a submission loss to Paulo Thiago, Swick has battled esophageal spasms that have nearly derailed his entire career. According to wiser minds than my own at the National Institutes of Health, esophageal spasms prevent the digestive tract from properly moving food through the body and can result in extremely painful cramp-like tightness in the chest. And to hear Swick describe it in his own words confirms just how harrowing the illness has been:

“I would wake in the night feeling like I had a heart attack. I wasn’t getting any sleep at all during camps or even during the week of fights. […] there was a time where I thought my career might be over, talking to the doctors. If I couldn’t eat like an athlete, if I couldn’t rest my body, I was finished.”

After several misdiagnoses, doctors were finally able to identify the disease, and, with moderate dietary alterations, Swick was able to return to training. Although the experience was undoubtedly trying, Swick remains focussed on the positive.

The time away from the UFC has given the 33 year old Texan the opportunity to rest and save his body from the daily wear and tear that would have come with an eight to twelve fight schedule over the last two and a half years.

“I’m coming back more healthy than ever. I’m faster than I’ve ever been, I’ve worked speed non-stop for two years, and I’m more motivated and hungry. That fire that used to burn is even bigger”, said Swick.

Standing in the way of Swick’s fairy-tale return to the Octagon is former TUF runner-up DaMarques Johnson, who is coming off of a submission loss to John Maguire and looking to improve on a pedestrian 4-4 record in the UFC.

When asked about the upcoming bought Swick praised Johnson’s stopping power saying that he loves “how he pressures and comes forward”. He added that being paired with Johnson was an ideal situation for him to make a return to the sport and put on an exciting fight for the fans who have continued to support him through his lengthy lay off: “He’s not gonna try to hang on to me or win a decision, and I think it’s gonna be a great matchup for the fans. He’s the perfect fight to showcase that I am back.”

Mike Swick and DaMarques Johnson are set to meet on Saturday August, 4th at UFC on Fox 4, broadcast live from Los Angeles’ STAPLES Center. Until then, take a minute to check out the official fight preview, featuring an insanely focused Swick: