Five live MMA events you can watch this weekend online 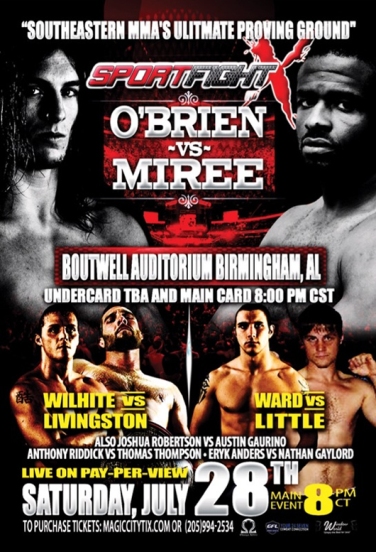 It’s true, there’s no UFC this weekend, no Strikeforce, no Bellator or XFC, but that doesn’t mean you diehard MMA fans out there still can’t get your fix. Here’s a look at some of the live mixed martial arts action going on this weekend that everyone with Internet access can watch.

The action kicks off early today (Friday), starting at 4:40 p.m. ET (1:30 p.m. PT) EFC Africa 15 will be airing live on Fight Now TV and streaming live online on UStream.tv (www.ustream.tv/channel/fight-now-tv) for the low price of $7.95.  They have 12 pro bouts scheduled and the event is headlined with a heavyweight match-up between Andrew “One Gear” Van Zyl (7-1) vs. Mohamed Abdul “The Hulk” Karim (5-3). You can view the entire fight card here: EFC Africa 15. U.S. fight fans may not be familiar with a lot of the names on this card but why not expand your mind and broaden your MMA horizons by checking out some MMA live from Johannesburg, South Africa.

Xtreme Cage Wars Fighting Championship 49 is going down this evening at the North Battleford Civic Centre in Saskatoon, Saskatchewan, Canada. XCW FC is a breeding ground for up and coming Canadian MMA fighters and this will be their 49th event. Tonight’s nine-bout card is headlined with Caleb Ermine (1-0) taking on Dauda Keita (1-0) for the XCWFC Lightweight Title. For the full fight card and to watch the XCW FC 49 live online stream this evening starting at 9 p.m. ET (6 p.m. PT) see our Live MMA Events page. The live online stream costs $9.99.

More Canadian MMA takes place Saturday night, July 28, with “Elite 1 MMA: Redemption”. The event is being held at the Redball Internet Centre in Moncton, New Brunswick, and is headlined with a welterweight title fight between the champion Richard Arsenault (4-2) defending his belt against challenger Ricky Goodall (9-6). In the co-main event, Nabil “The Thrill” Khatib (11-7) fights Bellator veteran Matt MacGrath (6-8). All the action starts tomorrow night at 7:30 p.m. ET (4:30 p.m. PT). To view the full fight card and order the live online pay-per-view for $9.99 go to ProMMAnow.com’s Live MMA Events page.

Sportfight X, one of the Southeast’s longest-running and most-respected mixed martial arts promotions returns on Saturday with “Sportfight X: O’Brien vs. Gabin” taking place at the Boutwell Auditorium in Birmingham, Ala. The main event features hot prospect Daniel O’Brien (1-0) taking on Elite XC and Bellator veteran Moyses Gabin (5-4) in a middleweight showdown. In the co-main event, grappling standout Stephen Wilhite (2-0) takes on Florida’s Chad Livingston (6-1) in the lightweight division. The first fight kicks off at 8 p.m. ET (5 p.m. PT). To view the full fight card and order the live online pay-per-view for $9.99 go to ProMMAnow.com’s Live MMA Events page.

There you have it fight fans. There’s no UFC or Bellator this weekend, but you have the female equivalent and you also have several events that could produce future big show talent and it is all online for your viewing pleasure. Check out some of these fights, and if you do, let us know how it went.