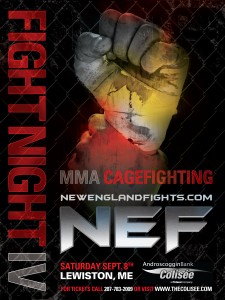 NEF co-owner and promoter Nick DiSalvo commented on the importance of this fight:

“Matt (Peterson) and I were really excited to get this fight lined up. Not only will this fight determine our first-ever Maine State Welterweight Champion, but it will also determine which of these two athletes is going to take it to the next level.  Sanders is one big win away from breaking out on the national scene.  Funch is hungry to get back to the UFC.  There’s a lot at stake here.”

NEF co-owner and matchmaker Matt Peterson spoke on the bout:

“Ryan is the face of Maine MMA, I can think of no one more-deserving of a shot at a Maine state title.  He’s been with us since the beginning.  He’s competed on all three previous NEF cards in either the main event or the co-main event.  Chris Young and Ernie Fitch of Young’s MMA (Sanders’ camp) demand only the toughest fights for their guys.  They’ll definitely get that in Ricardo Funch.”

All of Sanders’ professional bouts have taken place in Maine, including the lone loss which ended in quite a bit of controversy. Sanders’ most recent victory came last month over Ray Shawdee by second-round submission to a guillotine choke at NEF’s FIGHT NIGHT III event in Lewiston.  Sanders commented on the opportunity to fight a UFC veteran:

“He is very well rounded and tough to finish. Beating him would move me to the next level. I hope he is ready for a war.”

FIGHT NIGHT IV is slated for September 8th at the Androscoggin Bank Colisée in Lewiston, ME.  That night will also feature a headline fight between Jesse Peterson (6-2) and Cody Lightfoot (6-3) for the NEF Maine State MMA Middleweight Title.  Tickets are already on sale and most of cage-side sold-out within minutes.  For more information on this event, visit www.NewEnglandFights.com.