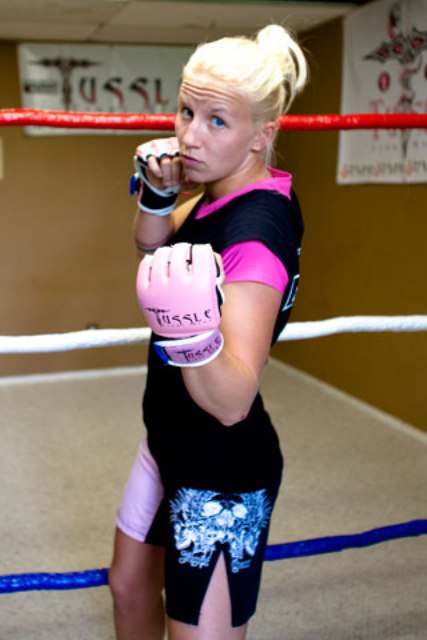 Twenty-four year old Lacey “The Ladie” Schuckman (7-4) of Lakewood, Colo. will replace Jasminka Cive in a flyweight (115 pounds) matchup with undefeated Ayaka Hamasaki (7-0) of Yamaguchi, Japan at the Invicta FC 2: Baszler vs. McMann women’s professional Mixed Martial Arts (MMA) event at Memorial Hall in Kansas City on Sat., July 28. Cive was unable to secure the visa necessary for her to travel from her native Austria, in time for the event.

Schuckman commented on the opportunity:

“I’m actually glad this opportunity came up at the last minute because I’m prepared for the fight,” said Schuckman, who is trained by her husband, Randall “The Green Machine” Schuckman, a recent winner of the Colorado State Golden Gloves Boxing tournament. “I’m always in the gym training with professional MMA fighters and professional boxers, so the timing of this fight is perfect. I also think this matchup is a big step up for me, one that I need take my career to another level.”

Schuckman made her professional debut in 2009 and has dabbled in muay thai as well as boxing over the years, competing in three different weight classes as a MMA fighter. She last fought in December submitting Michelle Blalock with a guillotine choke in the second round.

Hamasaki has also been competing professionally since 2009 and is the reigning champion in the JEWEL organization in Japan. Hamasaki commented on the opponent change on such short notice:

“I have no problem about the opponent change,” said Hamasaki. “I am just bit concern because it’s my first fight abroad. But regardless of the opponent, I want to give everything I got in this fight and that is all I care about now.”

Tickets for Invicta FC 2: Baszler vs. McMann, priced from $25, are available for purchase at Memorial Hall box office (913) 549-4853), online at Ticketmaster.com and InvictaFC.com and by phone at (800) 745-3000. In the bantamweight main event, 2004 Olympic Wrestling Silver Medalist and undefeated MMA star Sara McMann (5-0) of Gaffney, SC. and battle-tested submission wizard Shayna “The Queen of Spades” Baszler (14-6) of Sioux Falls, SD.

In the co-main event, Hitomi “Girlfight Monster” Akano (18-9) of Tokyo, Japan will square off with Japanese Jiu-Jitsu black belt and Cesar Gracie-protégé Alexis Davis (11-5) of Colborne, Ontario Canada at bantamweight.

The Invicta FC event will kick off with a five-bout preliminary card. In a bantamweight matchup between two undefeated future stars, Sarah Moras (2-0) of Kelowna, British Columbia Canada will face Raquel Pennington (1-1) of Colorado Springs, Colo.

The official Invicta FC 2 line-up is as follows: